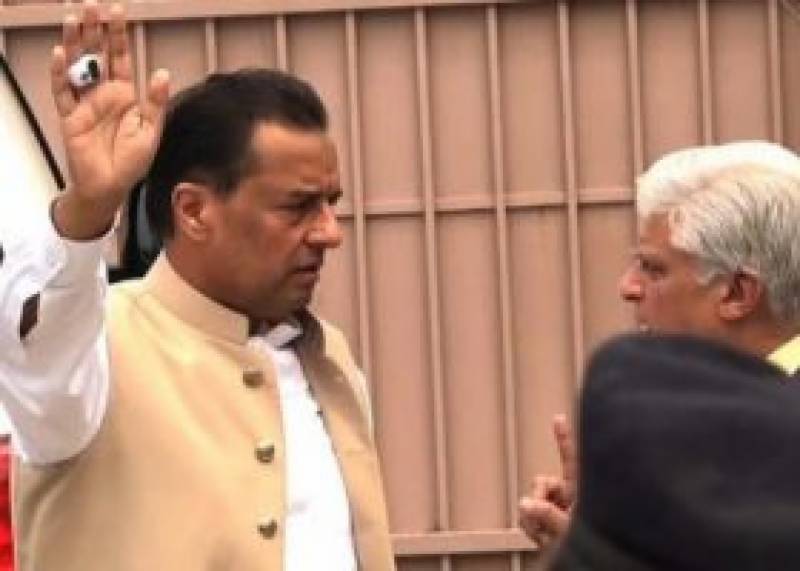 Islamabad (Staff Report): Captain (retd) Safdar appeared before the Accountability Court to attend the hearing of the corruption reference case against Sharif family members including Nawaz’S son-in-law, on Monday.

Judge of the Accountability Court Mohammad Bashir resumed the hearing.

The court approved Captain (retd) Safdar's bail and ordered him to submit a surety bond worth Rs5 million. Moreover, directed to take the court's permission before leaving the country.

Following the hearing Captain (retd) Mohammed Safdar and his wife Maryam Nawaz talked to media where Maryam said that she "knows very well what her 'crime' is".

Maryam commented that those who appear in court are being arrested form the airport while absconders are running free and holding rallies.

"But we are not ones to be afraid of being arrested," Maryam claimed.

Further she remarked, "Judges will have to answer as questions are raised when a case over Panama [Papers] ended up on the Iqama [foreign work permit which led to Nawaz's disqualification]."

After providing a copy of the reference, spread over 53 volumes, to Maryam and Safdar, Judge Mohammad Bashir also directed her to submit a surety bond of Rs5 million.

The National Accountability Bureau (NAB) has arrested Captain (retd) Mohammed Safdar on Monday, just after he landed at the Benazir Bhutto International Airport on his return from London, the sources reported.

According to details, a six-member NAB team waited outside Rawal Lounge of the airport for the arrest of Safdar, as the airport authorities stopped them from entering the lounge.

Following the arrest of Captain (retd) Safdar his wife Maryam Nawaz left the airport and arrived at the residence of Chaudhry Muneer - her daughter's father-in-law - in Islamabad's Sector F-6.

Captain (retd) Safdar and his wife Maryam, along with other Sharif family members, are accused in the Avenfield properties case whereas Nawaz and his sons, Hussain and Hassan, are accused in two more references: offshore companies' and Azizia Steel Mills'.