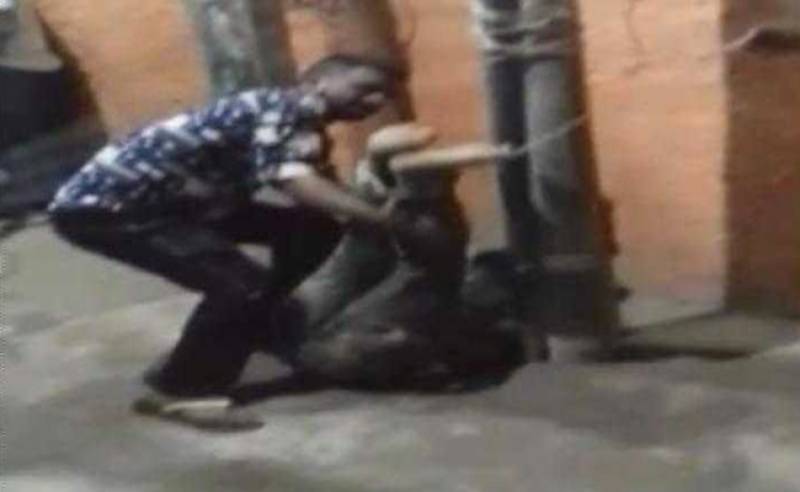 New Delhi (Web Desk): Two weeks ago, an incident happened in Malviya Nagar in south Delhi whose video of NDTV, shows a Nigerian national begs and screams as he is tied to a post and thrashed by a mob in Delhi, in a disturbing video that has been shared with.

Police say action will be taken against the attackers

The NDTV reported that the man was allegedly caught trying to rob a house in Malviya Nagar in south Delhi, which has a sizeable population of African students.

After the brutal assault, he was arrested and jailed but his attackers are still roaming free.

He was allegedly caught in the early hours of September 24 inside the house of a resident, Krishna Kumar.

By the time he was handed over to the police later that day, he was badly wounded and barely conscious.

People in the neighbourhood allegedly told the police that he was hurt when he fell down the stairs while trying to escape.

The video that NDTV has found exposes the collective lie.

In the mobile phone video, the Nigerian national is seen with his feet tied to a lamp post, begging for mercy as his attackers keep hitting him with sticks. Voices in the background can be heard egging on the mob and saying: "Get red chilly. Beat him harder..."

One man holds his feet and aims hard on the sole with a stick.

"Forgive me!" the Nigerian national cries out, his hands folded, but it doesn't move his attackers, who keep slapping him and demanding to know whether he has any hidden money.

In one clip, he is upright, tied to a lamp post and in his underwear.

He was taken to the police in that state, with injuries to his head, face, limbs and back. The police say after he was treated in a hospital, he was produced before a judge who sent him to jail.

But no one knew until the video emerged that he had been assaulted.

The police say action will be taken against the attackers based on the video.

Earlier this year, after attacks targeting Africans in Delhi and nearby, envoys described the attacks as "xenophobic and racial".

In two attacks caught on camera in April, four Nigerians were assaulted by a large group of people taking out a candlelight march at Greater Noida to protest against the death of a schoolboy of a suspected drug overdose and a Nigerian student was beaten mercilessly inside a mall by a mob.

US assures New Delhi to build 6 nuclear reactors in India