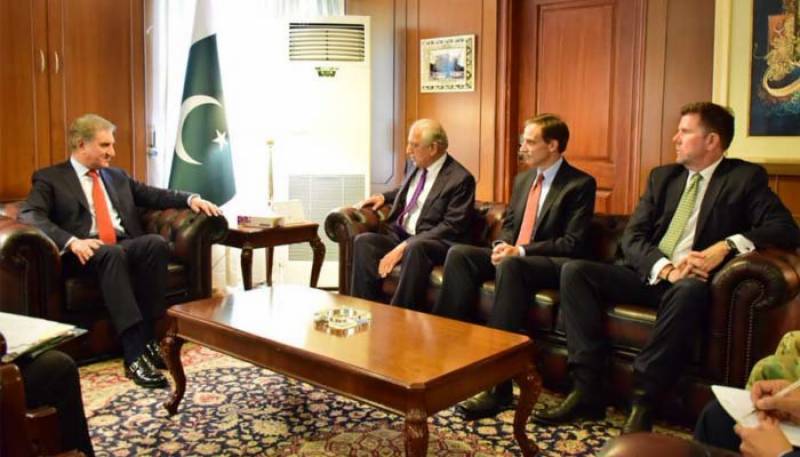 The meeting between Shah Mehmood Qureshi and Zalmay Khalilzad held in Islamabad on Tuesday.

Speaking on the occasion, Shah Mehmood Qureshi said that Pakistan will continue to play its role for political solution of Afghan conflict.

He said Pakistan welcomes the US efforts for peace in Afghanistan.

Earlier, Pakistan and the United States held delegation level talks on Afghan reconciliation process at the Foreign Office in Islamabad.

Pakistani side was led by Foreign Secretary Tehmina Janjua and the US side by its special Envoy for Afghanistan Zalmay Khalilzad.

The two sides discussed the Afghan situation and its reconciliation process.

Security, defence and diplomatic officials from both sides attended the delegation level talks.

Foreign Minister Qureshi earlier met and Khalilzad in New York where he had told the United States' new adviser on Kabul that Pakistan believes peace in Afghanistan that is directly and positively related to long-lasting stability in Islamabad.

FM Shah Mahmood Qureshi had also reiterated Pakistan's pledge for supporting peace in Afghanistan, to which Khalilzad responded by saying he, too, wishes to work with Islamabad for the joint goal of stability.