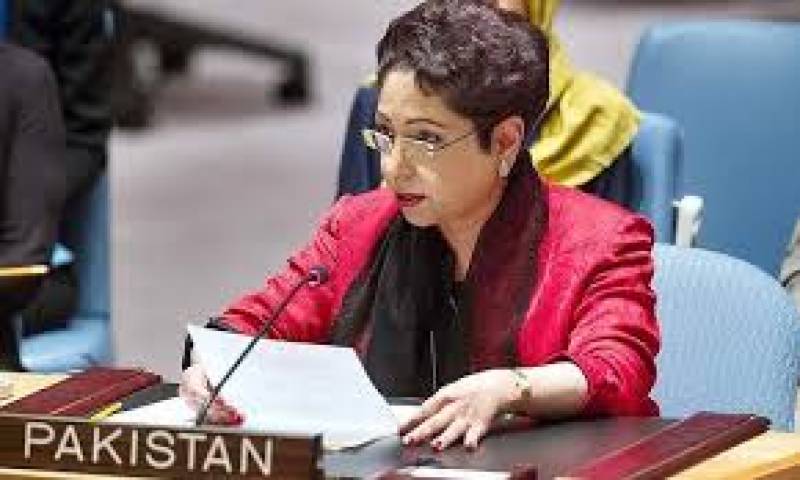 New York (APP): Pakistan urged the international community on the eve of the 72nd session of UN General Assembly to resolve the decades-old Kashmir and Palestine disputes for peace .

Ambassador Maleeha Lodhi, Pakistan's permanent representative to the UN, told a high-level forum on Culture of Peace on Thursday, "The plight and profound suffering of the Kashmiri people should shake the world conscience and urge the international community into action."

She said the situation in Indian occupied Kashmir was a travesty of international law, justice and humanity.

The Pakistani diplomat said that Peace could not be achieved amid widespread economic and social deprivation, human rights abuses and situations of political and economic injustice.

In this regard, she cited Kashmir and Palestine as the most glaring and tragic examples of historic injustices where people are still denied their fundamental right to self-determination.

Both these issues remained an unfinished agenda of the United Nations, she noted.

The General Assembly Declaration and Plan of Action on the Culture of Peace of 1999 bound member states in a global commitment to build a new century of peace and coexistence.

"Sadly though, the challenges confronting us in this endeavour continue to both be imposing and complex," she said, noting today's world is beset with armed conflicts, violence, wars and man-made disasters.

Noting that UN focus today was on prevention and sustaining peace, Ambassador Lodhi emphasised conflict resolution held the key to addressing both the existing and emerging international challenges.

"If we continue to shy away from protracted and complex disputes because they appear intractable, sustainable peace will remain a distant dream," Ambassador Lodhi said.

Even after two 20th century catastrophic global wars had receded into history, she said conflict and suffering had not ended.

"To address these failures and inadequacies, we need to adopt an approach that identifies and builds on our commonalities.

"We must join forces for genuine and constructive dialogue across ethnicities, cultures, races, religions and nationalities.

"Rather than erect walls to keep people out, we should build walls against racism, bigotry, Xenophobia and Islamophobia. This is an imperative for an interdependent world,” she added.

Pakistan, along with the Philippines, has, for over a decade, taken the lead in presenting a resolution on "Promotion of interreligious and intercultural dialogue, understanding and cooperation for peace".

This resolution, she said, enjoyed the unanimous support of all UN member states, and was a reflection of the commitment to achieving lasting peace.

"This, we believe, is our contribution to fulfilling the promise of working towards achieving a real Culture of Peace.