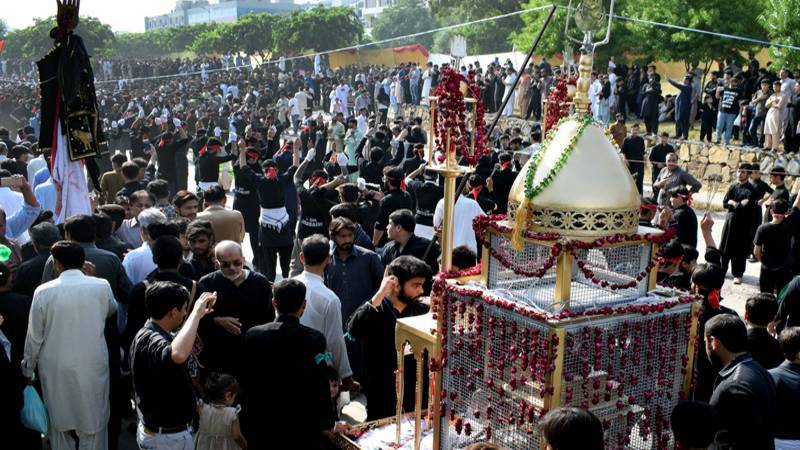 Islamabad, Lahore (Staff Report/Agencies): The procession of 9th Muharram on Monday being held across the country amid tight security.

Thousands of mourners have gathered at different locations to participate in the processions to pay tribute to Imam Hussain (AS) and his followers who sacrificed their lives for Islam at Karbala 1,400 years ago.

Lahore police have finalised foolproof security arrangements for the main procession route of Muharram 9 and 10.

Chief Traffic Officer (CTO) LiaqatAli Malik told the media that 2 SPs, 6 DSPs, 72inspectors along with women traffic wardens and 1,351 wardens would perform their duties along the route of the main procession.

All office staff would also be deputed on roads to facilitate the general public and no vehicle would be allowed to enter from any arteries on the procession route.

Traffic would be diverted to alternative routes from different points.

Snipers are positioned on rooftops and about 300 lanes connecting to Karachi’s main MA Jinnah Road have been sealed with shipping containers. The movements of the processions will be monitored on CCTV cameras too.

The provincial government has announced a ban on pillion riding across Sindh, including Karachi, on the 8th, 9th and 10th Muharram.

There will be a ban on pillion riding from the night of the 8th of Muharram until Ashura in order to maintain law and order and avoid any untoward incident.

The Sindh government has also requested the ministry to block the mobile phone services along the procession routes on Muharram 9 and 10.

In Islamabad, the biggest mourning procession will depart from Markazi Imambargah Asna Ashri, in Sector G-6/2, and pass through different imambargahs and culminate where is started from. More than 10,000 policemen have been deployed to ensure the security of different processions.