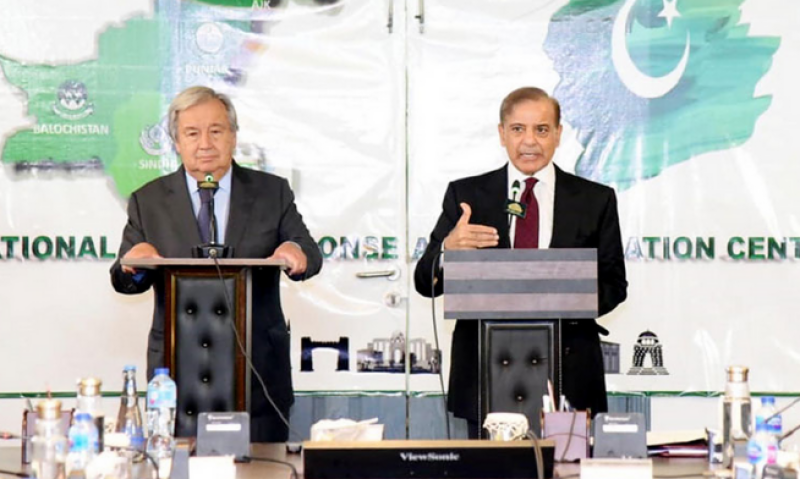 Islamabad (Web Desk): United Nations (UN) Secretary General Antonio Guterres on Friday appealed the international community that Pakistan needs massive financial support to undertake rescue and relief efforts as well as to meet the challenge of rehabilitation and reconstruction in the wake of devastation caused by recent floods that displaced more than 33 million people across the country.

Addressing a joint news conference alongside Prime Minister Shehbaz Sharif after attending a briefing at the National Flood Response Coordination Centre (NFRCC), the UN chief said said Pakistan is not making any significant contribution to the industrial emissions, but it faces major brunt of the climate change.

He said it was absolutely essential for other countries, particularly those contributing to carbon emissions, to mobilize resources for Pakistan following the devastating monsoon.

"Today, it is Pakistan and tomorrow it could be any other country. Mobilizing resources for Pakistan is a matter of justice," he said.

Guterres said he would continue to raise his voice for the Pakistani government and people who were grappling with difficult situations amid floods.

"Pakistan is in my heart as I have worked with this country for 17 years while the nation extended enormous generosity to Afghan refugees for decades,” he said.

PM Sharif expressed gratitude to the UN Secretary-General for his “extremely kind and generous gesture” of visiting Pakistan to get first-hand information and express solidarity with the people.

The prime minister said the civil government along with armed forces was carrying out massive rescue, relief and rehabilitation activities in the flood-affected areas.

He said Pakistan IS facing the brunt of natural disasters and a similar situation could be faced by the rest of the world in future.

PM Shehbaz emphasized that after the rescue operations, Pakistan needed enormous funding for rehabilitation and reconstruction of damaged infrastructure.

The government is doing its best despite meagre resources, he said and assured the the UN chief that the dispensation of flood assistance would be made in a transparent manner.

Chairman NFRCC Ahsan Iqbal in his briefing mentioned that the 2010’s super floods affected 20 million people, however, the current flash floods impacted 33 million across the country.

He said hill torrents proved a challenge amid a lack of efficient infrastructure to deal with the disaster and resulted in heavy loss of lives, infrastructure, livestock and crops.

Ahsan Iqbal said Pakistan was expecting around three percent reduction in Gross Domestic Product (GDP) in the backdrop of a combination of challenges including floods, IMF programme and the economic situation in the aftermath of Russian-Ukraine war.

Coordinator NFRCC Maj Gen Zafar Iqbal in his briefing said one-third of Pakistan was inundated in water covering a land area equal to the size of the United Kingdom, Portugal, New Zealand and Ecuador.

He said floods led to the loss of over $30 billion including the damage to 750,000 livestock.

In Sindh, he said, the national railway track remained underwater and the train service from Islamabad to Karachi could not be operated at the moment. It was highlighted that Manchar Lake burst at three places, affecting the railway line. In Balochistan, he said, four districts were still under water.

The NFRCC official said the coordinated efforts among civil government, military and NGOs including the UN aid bodies are in full swing, adding that the assessment survey on relief operations in the provinces would start by Monday.

Meanwhile, addressing a joint press stakeout with Foreign Minister Bilawal Bhutto Zardari, the UN Secretary General called for bringing the climate change issue on the international agenda and urged the world to support Pakistan not just to respond to present day challenge rather prepare itself for the future.

Earlier, both the leaders held a meeting to discuss the grave humanitarian situation in the flood-hit areas of the country. They also exchanged views on dealing with climate crisis, mobilisation of climate finance and funds for reconstruction, rehabilitation and adaptation in the wake of floods in Pakistan.

FM Bilawal, calling it a climate catastrophe, said considering the magnitude of the destruction, Pakistan was unable to get funds required to meet shelter, clothing and food for the 35 million flood-stricken people.

He said the flood survivors were also at the risk of waterborne disease besides viruses and bacteria.

The foreign minister said as the country was yet going through the rescue and relief phase, a gigantic challenge of rebuilding the people’s houses, schools and infrastructure was ahead.

The UN secretary general, who is on two-day solidarity visit to flood-hit Pakistan, expressed deep solidarity with the people of Pakistan, said he would be visiting the flood hit areas on Saturday to review the magnitude of the destruction.

"No country deserves this fate but particularly, no countries like Pakistan, that has contributed nothing to global warming," he remarked.

Guterres urged the world step up their efforts to support Pakistan and other developing countries financial and technical resources to enable them cope with the challenges like floods, also urging the developed countries to produce a credible roadmap to back their commitments regarding the doubling of funding to address the climate change.

The UN chief said the loss and damage due to the climate change was not a future event rather "it is happening now" necessitating the urgent actions.

He told media that the UN was on ground to support the flood-hit people with the teams providing food and other emergency supplies.

"What we have done is but a drop in the ocean for the people. Pakistan needs massive International support for relief and rehabilitation," he commented.

Earlier, PM Shehbaz and the UN chief met and discussed the situation in the wake of massive floods in Pakistan.

The two sides focused on joint efforts to carry out relief, rescue and rehabilitation at international level to mitigate the sufferings of the flood-affected people.

The UN Secretary General, who has also launched a global appeal to raise $160 million as flood assistance for Pakistan, arrived in Islamabad early this morning to highlight the catastrophe at international level.

The two sides focused on joint efforts to carry out relief, rescue and rehabilitation at international level to mitigate the sufferings of the flood-affected people.

The UN Secretary General, who has also launched a global appeal to raise $160 million as flood assistance for Pakistan, arrived in Islamabad early this morning to highlight the catastrophe at international level.