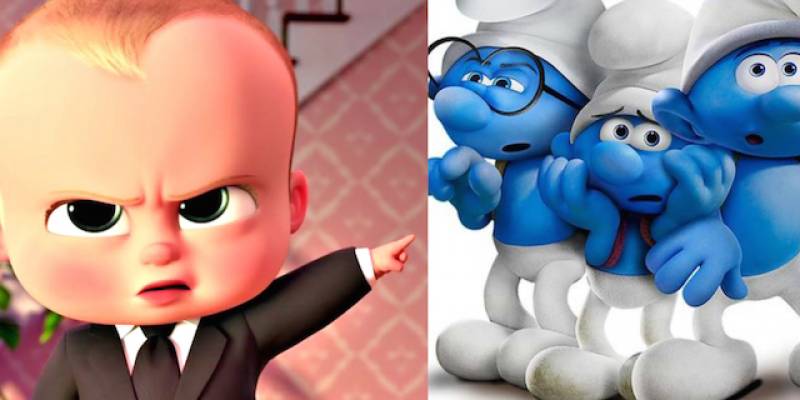 Los Angeles (Reuters): The cuddly creatures' once-promising film franchise is looking awfully creaky after "Smurfs: The Lost Village" stumbled at the domestic box office this weekend. The Sony release opened to a negligible $14.1 million. The film was an attempt to reinvigorate the series after 2013's "The Smurfs 2" racked up a disappointing $347.5 million on a hefty $105 million budget. It's a fall from quite a height. The first film, 2011's "The Smurfs," had showed such promise, grossing $563.7 million globally, but interest in the big screen adventures of the creatures has waned with each sequel. With the Smurfs failing to generate much excitement, DreamWorks Animation and Fox's "The Boss Baby" captured first place at the North American box office for the second consecutive weekend, earning $26.3 million to push its domestic haul to $89.4 million. Disney's "Beauty and the Beast" came in second, pulling in $25 million to push its stateside grosses to a lordly $432.3 million. Box office analysts blame the glut of family titles for hobbling the Smurfs. "They should have waited a few weeks to open it," said Jeff Bock, an analyst with Exhibitor Relations.

Bock was ready to write the obituary for the franchise, saying, "A major studio does not open an animated film at $14 million and expect to have a sequel."

This weekend is something of a throat clearing for the industry. "The Fate of the Furious," the latest chapter in Universal's long-running chronicle of vehicular carnage, is slated to roar into theaters next Friday. It should dominate ticket sales, racking up an $100 million debut and keeping Vin Diesel in designer tank tops for the foreseeable future. "It's looming large on the horizon," said Paul Dergarabedian, senior media analyst at ComScore. "It's going to be a monstrous debut."

New Line and Village Roadshow's "Going in Style" took fourth place with $12.5 million. The comedy about three retirees who rob a bank stars Morgan Freeman, Alan Arkin, and Michael Caine. It's a low-budget remake of a 1979 comedy of the same name and cost $24 million to produce. The film resonated with older crowds, with 72% of the audience clocking in over the age of 50. "The chemistry of the three guys really works together," said Jeff Goldstein, domestic distribution chief at Warner Bros., New Line's studio parent company. "They have fun together and it shows. It was a core part of the film's appeal."

Paramount's "Ghost in the Shell" rounded out the top five, grossing $7.3 million to bring its domestic gross to a disastrous $31.6 million. The Japanese manga adaptation is shaping up to be one of the year's biggest bombs. Dogged by "whitewashing" controversy after Scarlett Johansson nabbed a part intended for an Asian actress, "Ghost in the Shell" won't stand a chance of recouping its $110 million production budget.

Sony isn't ready to wave the white flag on the Smurfs. The studio notes that the previous two films earned more than 70% of their gross from foreign markets. The studio is also pleased with the film's A CinemaScore, a sign that audiences are responding to the picture.

"We delivered a film that I think is the best yet," said Rory Bruer, Sony's domestic distribution chief. "Word-of-mouth should be strong."

Sony also reined in costs. "Smurfs: The Lost Village" has a $60 million production budget, a fraction of the previous two entries' price tag. However, the weak result extends a punishing period for Sony. The studio has been dogged by bombs such as "Life" and "Inferno," while highly anticipated releases such as "Passengers," a science-fiction romance with Chris Pratt and Jennifer Lawrence, struggled to turn a profit.

In limited release, "Their Finest" opened on four screens in New York and Los Angeles to $77,000 for a per-screen average of $19,250. The comedy is set in World War II-era London and follows a troop of propaganda filmmakers. EuropaCorp bought the picture out of the Toronto Film Festival -- STX is distributing "Their Finest" on its behalf.

Overall ticket sales were up more than 15% on the prior-year period. Last year at this time Melissa McCarthy's "The Boss" topped charts with a $23.6 million bow. Thanks to hits such as "Beauty and the Beast" and "Logan," 2017 continues to outpace 2016, with revenues up 5%.