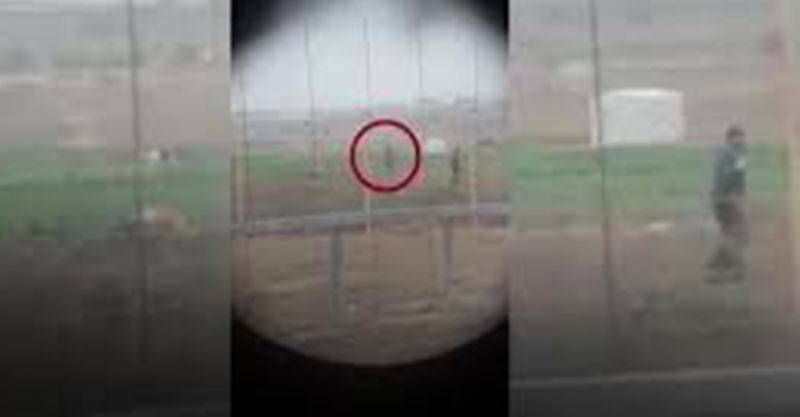 Gaza (Web Desk): Footage has emerged that appears to show an Israeli sniper shooting an unarmed Palestinian in the Gaza Strip as his fellow soldiers cheer and celebrate.

Israel’s military says it is investigating video footage, filmed through the scope of a rifle, which went viral online and featured prominently on Israeli TV.

In the video broadcast on Monday, three men are seen nearing a barrier or fence. The crack of an apparent gunshot is heard and one of the men, who had been standing still and appeared to be unarmed, falls to the ground.

The grainy video comes after almost two weeks of daily protests by Palestinians on the Israel-Gaza border in which the Israel Defence Forces (IDF) have shot more than two dozen people dead and wounded hundreds more, according to Gazan health officials.

As reported by Haaretz, in the video, a man is heard asking “Do you have a bullet in the barrel?” and saying “is it on him?” After the sniper shoots and hits the Palestinian, cries of enthusiasm are heard.

“Wow, what a video. Yes! Son of a bitch! What a video!” a voice is heard to exuberantly declare in Hebrew.