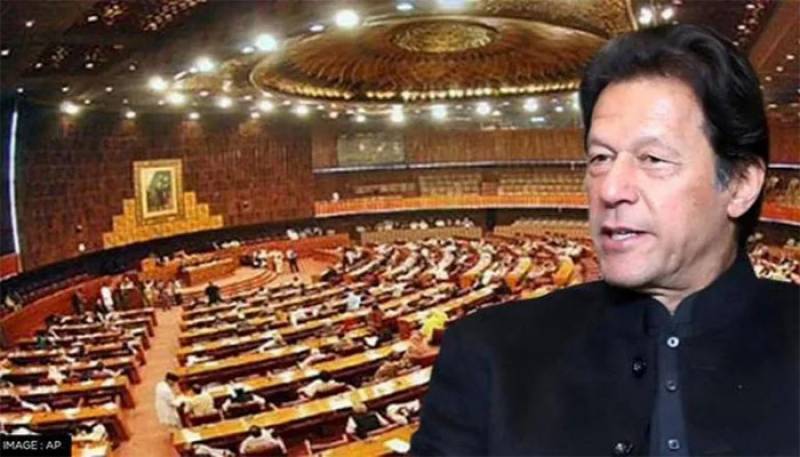 Islamabad (Web Desk): Imran Khan has become the first prime minister of Pakistan to be ousted from his office through vote of no-confidence.

According to details, the National Assembly on Sunday passed the no-confidence resolution against Imran Khan as 174 MNAs out of 342-member house recorded their votes in favour of the no-trust motion against him.

“174 [members] have voted in favour of the resolution… consequently the resolution for vote of no-confidence against Prime Minister Imran Khan has been passed with a majority,” Sadiq announced.

The leaders of joint Opposition delivered their victory speeches after the conclusion of voting and announcement of result.

Taking the floor, PML-N President Shehbaz Sharif expressed the commitment to take forward the country and make it a great nation whilst forgetting bitterness of the past.

“We want to health the woes and wounds of the nation. We will not take revenge from anybody. There will be no injustice or excesses and innocent people will not be sent behind the bars,” Shehbaz said, adding that the law will take its course.

The PML-N leader said we respect the judiciary. He vowed to run the affairs of the country in consultations and taking along the institutions.

Shehbaz Sharif also thanked other allied parties for demonstrating unprecedented unity, solidarity and discipline. He was confident that this unity will again build Pakistan.

The PPP chief said that he has learned a lot during the last four years of political struggle.

“I would like to give a message to the youth that nothing is impossible,” Bilawal asserted.

Jamiat Ulema-Islam (JUI-F) leader Maulana Asad Mahmood congratulated all the democratic forces that carried out struggle for supremacy of the constitution.

“We have achieved our objective through a democratic struggle,” said.

The JUI-F leader expressed commitment that the allied parties will continue to have unity in days ahead as well and make Pakistan an Islamic welfare state.

In his speech, Muttahida Qaumi Movement-Pakistan (MQM-P) leader Khalid Maqbool Siddiqui said this change should not be confined to merely change of faces, but it should bring about real change in the lives of people. He said democracy is the only way to progress.

“We will not take revenge from anyone, but serve the nation in the real sense,” he said.

Balochistan National Party-Mengal (BNP-M) Chief Sardar Akhtar Mengal said that the credit for today’s success goes to all the workers of the allied parties. He emphasized on ensuring supremacy of the constitution.

MNA Mohsin Dawar said terrorism is one of the biggest challenges, which needs to be addressed through a clear strategy. He said there should be zero tolerance against militancy.

In his remarks, Awami National Party (ANP) leader Amir Haider Hoti said the allied parties not only made the no-confidence motion a success but also strengthened democracy.

Lone PTI MNA present in the house, Ali Muhammad Khan in his speech said that Imran Khan faced defeat but not accepted slavery. He said Imran Khan was targeted because he stood for independent foreign policy.

He expressed hope that Imran Khan would again become prime minister with the support of people.

Speaking in the session, Jamhoori Watan Party (JWP) leader Shahzain Bugti expressed hope that the backward areas will be given priority for development in the next setup. He hoped that the next government would perform better than the last one.

MNA Aslam Bhotani expressed confidence that the next government would not forget Balochistan and development work could be carried out there at a fast pace, particularly in the areas where CPEC is being implemented.

MNA Ali Nawaz Shah said we all together have to work for progress and prosperity of the country.

Before adjourning the session, Ayaz Sadiq said that the nomination papers for the new prime minister may be submitted by 2pm today (Sunday) and scrutiny would be done by 3pm.

He summoned the NA session on Monday at 11am to elect the new prime minister.

Ayaz Sadiq after initiating the process for voting on on-trust motion adjourned the house for four minutes.

The house then resumed proceedings at 12:02am on Sunday.

As soon as Sadiq presided over the NA session, treasury benches lawmakers left the house.

Asad Qaiser had earlier adjourned the crucial National Assembly session, which commenced at 10.30am on Saturday, multiple times without holding the voting. The all-important session of the lower house of parliament was summoned on Supreme Court’s directives to hold voting on no-confidence motion against Prime Minister Imran Khan.

The joint opposition had lodged an official complaint with the former NA speaker, urging him not to further delay the voting on no-confidence motion against the prime minister. They said all authorities concerned including him were guilty of “gross contempt and liable to punishment in accordance with law”.

The session of the National Assembly to decide the fate of Prime Minister Imran Khan started at 10:30am on Saturday under the chairmanship of Speaker Asad Qaiser.

After speeches from the treasury and opposition benches the session was adjourned for Iftar.

Federal Minister for Energy Hammad Azhar started his speech but the chair adjourned the session yet again and was expected to resume at 9:30pm after Isha prayers but it commenced after 11:40pm.