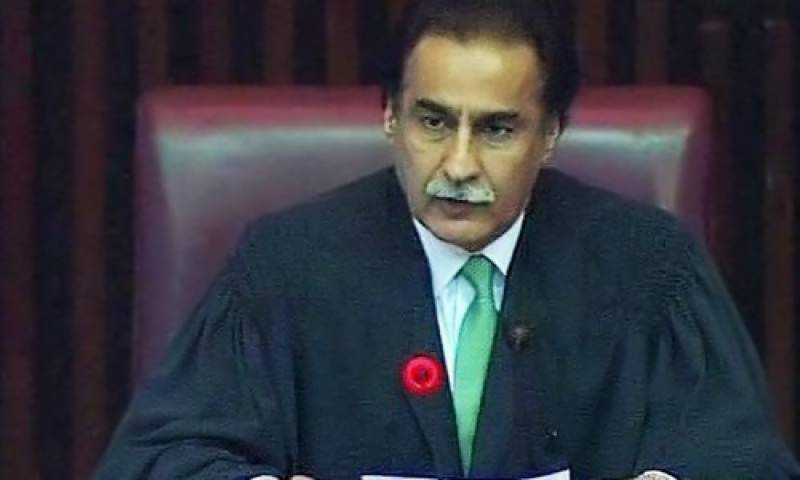 Ayaz Sadiq after initiating the process for voting on on-trust motion adjourned the house for four minutes. The house then resumed proceedings at 12:02am on Sunday.

As soon as Sadiq presided over the NA session, treasury benches lawmakers left the house.

Qaiser had earlier adjourned the crucial National Assembly session, which commenced at 10.30am on Saturday, multiple times without holding the voting. The all-important session of the lower house of parliament was summoned on Supreme Court’s directives to hold voting on no-confidence motion against Prime Minister Imran Khan.

The joint opposition had lodged an official complaint with the former NA speaker, urging him not to further delay the voting on no-confidence motion against the prime minister. They said all authorities concerned including him were guilty of “gross contempt and liable to punishment in accordance with law”.

The session of the National Assembly to decide the fate of Prime Minister Imran Khan started at 10:30am on Saturday under the chairmanship of Speaker Asad Qaiser.

Resuming his speech FM Shah Mahmood Qureshi said that the government will face the no-confidence motion against PM Imran.

Qureshi said Prime Minister Imran Khan, in his address to the nation on Friday, expressed dissatisfaction over the SC's decision but also stated that he accepts the judgment.

Qureshi said blatant attempts were being made for regime change in Pakistan and history will expose the elements behind it.

Saudi Arabia increases pilgrimage capacity to one million for Hajj 2022

The foreign minister said that Pakistan being a sovereign state will not accept dictation from any other country.

FM Qureshi said that the 'threat letter' is authentic which was forwarded by a seasoned diplomat.

He proposed an in-camera session of the parliament on the matter. Qureshi said that the ambassador in Washington can be asked to give a briefing to the house to ascertain whether or not the document is authentic.

FM Qureshi said that Pakistan desires to improve relations with all the countries including the United States (US), China, Russia and the European Union to enhance its diplomatic space. He said we do not want to be hostile to any country.

PML (N) leader Khawaja Saad Rafique also demanded early voting on the no confidence motion. He said there is a clear direction of the apex court on it.

Speaking on the floor, Pakistan Peoples Party (PPP) co-chairman, Asif Ali Zardari said voting should be conducted on the no-confidence motion without wastage of time.

"We are ready to sit with the political forces for the betterment of the country, " he said.

Minister for Planning and Development Asad Umer regretted horse trading in the house. He said this process must be stopped to strengthen democratic setup.

"About 5.5 million jobs have been created, due to prudent policies of the Pakistan Tehreek-e-Insaf (PTI) government, during the last three years," Asad Umar said.

Sharing the achievements of his government on economic front, the minister said that Pakistan achieved highest exports.

He said the country had achieved over 5 percent growth rate during last two years, which was the highest in the last 15 years.

Criticizing the opposition parties for becoming part of a conspiracy being hitched by foreign powers against the elected government of PTI, he said people of Pakistan would never support the elements working against the interest of the country.

He regretted that leadership of the opposition had refused to attend the meeting of the Parliamentary Committee on National Security convened by the Speaker National Assembly.

The minister once again invited the opposition parties for an in-camera briefing on the “Threat Letter” to the parliament.

He said that the stock market rose after the apex court issued its verdict while the dollar also fell, once again calling on the speaker to hold the vote.

"I don't want to go to the court against you tomorrow. We have to live in Pakistan. We have to maintain links with every political party. So hold the vote and end this. Let's move forward so that Pakistan can prosper," he told Qaiser.

This prompted the NA speaker to say that he would implement the court's directive in "true spirit".

Jamiat Ulema-e-Islam-Fazl (JUI-F's) Maulana Asad Mehmood said that the government wanted to sabotage the country's politics, the Constitution and the parliament by using the "threat letter".

He questioned why the government did not present the "threat letter" to lawmakers in parliament. "Why did you use the letter to break the law and dismiss the no-confidence motion?"

He claimed the speaker no longer had any more excuses to delay the vote and called on him to accept his defeat.

Speaking on the floor, Minister for Human Rights Dr Shireen Mazari's revolved around the alleged US influence on Pakistani politics.

It is this nation's misfortune that America has always been successful in changing the leaders of Pakistan.

She said that the opposition was invited to check the 'threat letter' that according to government is 'proof' of a foreign-funded conspiracy.

Shireen Mazari called the Supreme Court’s verdict a ‘judicial coup’. She asked the chief election commissioner to resign if he was unable to perform his constitutional duties.

The PTI lawmaker also objected on apex court’s decision of calling in the CEC in the suo motu case and asking about elections when that wasn’t the matter pending before the top court.

Following Mazari's speech, the session was initially adjourned for a 20-minute Asar prayers break, following which another adjournment was taken till 7:30pm due to Iftar break.

Federal Minister for Energy Hammad Azhar started his speech but the chair adjourned the session yet again and was expected to resume at 9:30pm after Isha prayers.