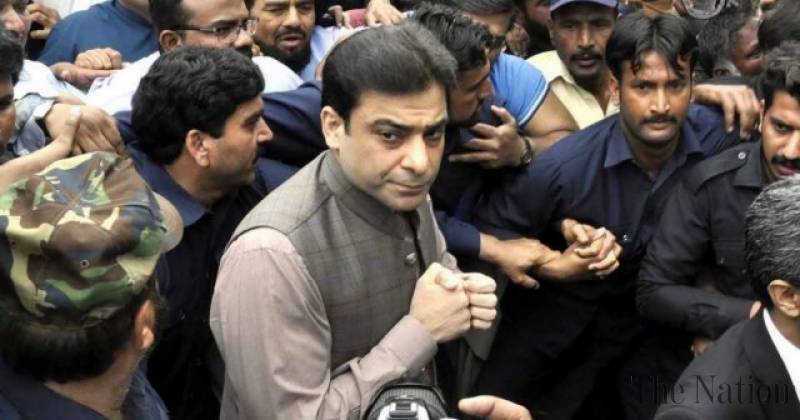 Lahore (Staff Report): An accountability court on Wednesday extended physical remand of Leader of the Opposition in the Punjab Assembly Hamza Shehbaz till July 24 in the assets beyond means case.

The National Accountability Bureau (NAB) produced the Pakistan Muslim league-Nawaz (PML-N) leader before the court and requested to extend his remand.

On July 26, the court had extended Hamza's physical remand in the assets beyond means case for 14 days upon NAB’s request.

Hamza was arrested by the NAB on June 11 after the Lahore High Court (LHC) rejected his interim bail in the Ramzan Sugar Mills and money laundering cases.

According to the accountability watchdog, the PML-N leader made five companies from 2006 to 2009 and did a business of more than Rs19billion.

On July 5, the accountability court sent Hamza Shehbaz to prison on 14-day judicial remand in the Ramzan Sugar Mills case.

PML-N President Shehbaz Sharif along with Hamza appeared before the accountability court.

The court had rejected NAB’s plea seeking the physical remand of Hamza and sent him on 14-day judicial remand in the case and ordered the accountability watchdog to produce Hamza Shehbaz on July 20.

On April 9 this year, Shehbaz Sharif and Hamza were indicted in the Ramzan Sugar Mills case.

NAB had filed a reference against the father-son duo and alleged that former Punjab CM Shehbaz Sharif misused his authority by using public funds for the construction of a bridge to facilitate the Ramzan mills.