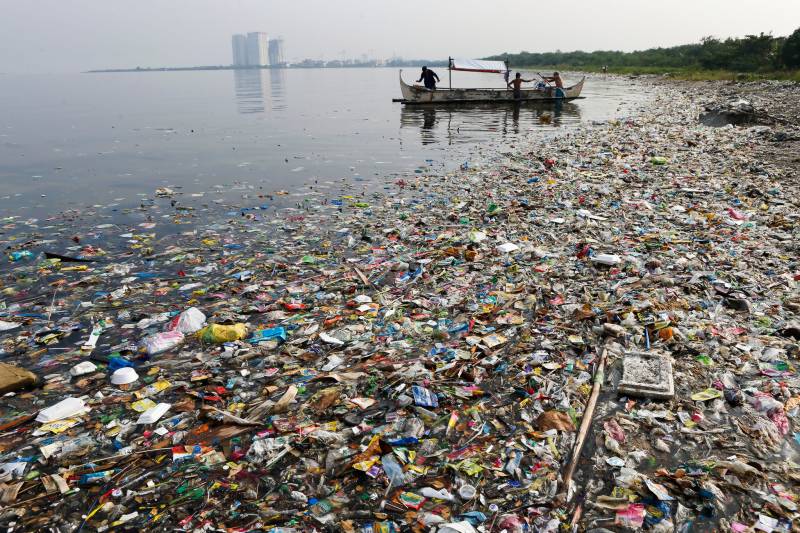 Delft, Netherlands (Web Desk): A recent research has claimed that dumped plastic is one of the major sources of marine pollution.

According to the research, Plastic that is dumped in rivers and then ends up in the world's oceans pollutes oceans.

The researchers at a Dutch foundation are developing new technologies for ridding the oceans of plastic. The researchers say rivers carry an estimated 1.15-2.41 million tonnes of plastic into the sea every year, an amount that need between 48,000 to over 100,000 dump trucks to carry it away.

Their latest study, published in Nature Communications journal Wednesday, added that two-thirds of the pollution comes from the 20 most polluting rivers, the overwhelming majority in Asia with the Yangtze River in China topping the list.

The Yangtze, the world's third-longest river, "is the largest contributing catchment", dumping some 330,000 tonnes of plastic into the East China Sea.

This is followed by the Ganges River in India and a combination of the Xi, Dong and Zhujiang Rivers in China as well as four Indonesian rivers: the Brantas, Solo, Serayu and Progo.

The rest of the world shared the remaining 14 percent of plastic pollution via rivers, The Ocean Cleanup researchers said.

They said, "Most of this river plastic input is coming from Asia, which emphasises the need to focus on monitoring and mitigation efforts in Asian countries with rapid economic development and poor waste management."

The researchers however issued a disclaimer saying "there is very little data to document these assumptions and thoroughly verify the validity of our model."

"Yet, the relatively high concentrations of ocean plastic found at the surface of the North Pacific Ocean where buoyant plastics originating from Asia can accumulate, suggest that our assumptions are plausible," they said.

The study comes against the backdrop of the UN's first ocean conference opening in Miami on Monday, where plastic pollution was singled out as particularly harmful.

UN Secretary General Antonio Guterres cited a recent study that showed plastic could outweigh fish in 2050 if nothing is done.

Every year, more than eight million tons of plastic ends up in the ocean, costing at least $8 billion (7.1 billion euros) in damage to marine ecosystems and killing an estimated one million sea birds, 100,000 sea mammals and untold numbers of fish.