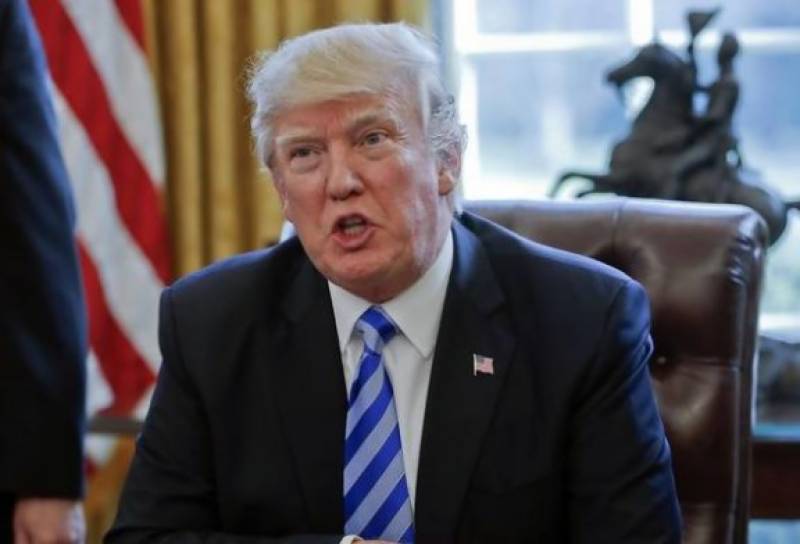 Washington (Reuters): United States President Donald Trump scolded Qatar of being a "high level" sponsor of terrorism, potentially hindering the U.S. Department of State's efforts to ease heightening tensions and a blockade of the Gulf nation by Arab states and others.

Trump told reporters at the White House, "The nation of Qatar unfortunately has historically been a founder of terrorism at a very high level."

"So we had a decision to make, do we take the easy road or do we finally take a hard but necessary action. We have to stop the funding of terrorism. I decided ... the time had come to call on Qatar to end its funding," Trump said, adding that he helped plan the Qatar action with Arab leaders after a recent summit in Riyadh, Saudi Arabia.

A senior administration official told Reuters earlier this week that the United States had no indication from the Saudis or Emiratis in Riyadh during Trump's visit last month that they would sever ties with Qatar. The crisis is a major diplomatic test for the United States, which is a close ally of countries on both sides. Trump has called key players in the region since they severed ties with Qatar on Monday.

The Trump administration has given mixed signals on whether to isolate Qatar or bring it into talks with other Gulf nations.

The confrontation in the region intensified on Friday as Arab states tightened their squeeze on Qatar by putting dozens of figures with links to the country on terrorism blacklists, while Qatar's ally Turkey rushed to its side with plans to send troops.

The Pentagon said the blockade was hindering U.S. ability to plan for long-term operations in the region. Al Udeid Air Base in Qatar is home to more than 11,000 U.S. and coalition forces and an important base for the fight against Islamic State. It is the U.S. Air Force's largest base in the region.

U.S. Secretary of State Rex Tillerson said he expected all parties to find a resolution.

"We call on the kingdom of Saudi Arabia, the United Arab Emirates, Bahrain and Egypt to ease the blockade against Qatar," he said in Washington.

Tillerson told reporters at the State Department that the crisis, which has cut transportation links and trade, had begun hurting ordinary people in Qatar, and that it was impairing business dealings and harming the U.S. battle against the Islamic State militant group.

A picture on Facebook showed a supermarket displaying food from Turkey including milk, eggs and chicken.

Tillerson demanded that Qatar, as well as the other countries, take steps to curtail support for terrorism. Saudi Arabia and other Gulf states have accused Doha of supporting extremist groups, but Tillerson suggested that all sides needed to do more.

"The emir of Qatar has made progress in halting financial support and expelling terrorist elements from his country, but he must do more and he must do it more quickly," Tillerson said. "Others must also continue to eliminate factions of support for violent organizations within their own borders."

On Trump’s Air Force One flight to New Jersey, a senior White House official told reporters that Trump and Tillerson were on the "same page" on Qatar.

"The United States wants a resolution to the situation but it wants a resolution on terms consistent with the principles the president laid out in Riyadh,” the official said, adding that Trump was concerned about the humanitarian impact of the crisis but also Qatar's support of "terrorist finance."

Riyadh, Cairo and their allies have accused Qatar, the world's richest country per capita, of supporting militant Islamist movements across the region. They have imposed what Qatar said was a blockade of shipping and air traffic and closed Qatar's only land border, causing panic buying at supermarkets and provoking confusion and anxiety across the population.

Qatar, which has developed an assertive foreign policy over the past decade, denied that it supports militants and said it was helping to reduce the threat of terrorism by backing groups that fight poverty and seek political reform.

"They will not have a positive impact on the region but a negative one," the minister said during a visit to Germany.

The United Arab Emirates said on Friday that Qatar must acknowledge concerns about its "troubling support for extremism" and "re-examine its regional policies."

"This will provide the necessary basis for any discussions," UAE ambassador to the United States Yousef Al Otaiba said in a statement on Friday.

"Along with our American colleagues but above all our colleagues in the region, we must try to find solutions, especially lifting the sea and air blockades," Gabriel told reporters.

"THE HOUR OF DIPLOMACY"

Qatar has vowed to ride out the isolation imposed on it by fellow Arab states and said it would not compromise its sovereignty over foreign policy to resolve the region's biggest diplomatic crisis in years.

One U.S. official said that while Qatar needs to do more to combat terrorist financing, it was inaccurate to single out that Gulf nation.

“The (counter terrorist-financing) challenges they face aren’t unique to them,” said the official, who spoke on condition of anonymity. “There are other countries in the region that grapple with the same issues.”

Imran Khan announces long march to Islamabad on May 25

Qatar is home to 2.7 million people but only about 300,000 citizens. Most of its population is comprised of foreign workers who helped build the tiny finger off the Arabian Peninsula into a natural gas exporting powerhouse, crowned with skyscrapers. Projects include soccer stadiums for the 2022 World Cup.

Armed Qatari gunboats patrolled the corniche of the capital Doha on Friday.

Tiny Qatar has played an outsized role as a sponsor of factions in wars and revolutions across the Middle East under its 37-year-old ruler, Tamim bin Hamad Al Thani, and his father Hamad who stepped down in 2013 after 18 years in power.

With supply chains disrupted and concern mounting about economic turbulence, banks and firms in Gulf Arab states were trying to keep business links to Qatar open and avoid a costly firesale of assets. The riyal currency has tumbled and the cost of insuring Qatari debt against default has risen.

The Qatari government said the move "reinforces baseless allegations that hold no foundation in fact".

"Our position on countering terrorism is stronger than many of the signatories of the joint statement - a fact that has been conveniently ignored by the authors," it said in a statement. Those on the list, including the former interior minister, could not be reached for comment.

Many of the others added to the list are figures associated with the Muslim Brotherhood who have made Qatar a base, including Brotherhood spiritual leader Yousef al-Qaradawi. Some are prominent jihadists who have fought in Libya and Syria.

Turkish President Tayyip Erdogan, whose AK Party has its roots in Islamist politics and who has voiced support for the Brotherhood, signaled his firm backing for Qatar by swiftly signing a law to send troops to a Turkish base there.

Turkey will send warplanes and warships to Qatar after an initial deployment of troops, the mass-circulation Hurriyet newspaper said on its website.

Turkish officials were not immediately available to comment on the report, but Hurriyet said there were plans to send some 200 to 250 soldiers within two months.