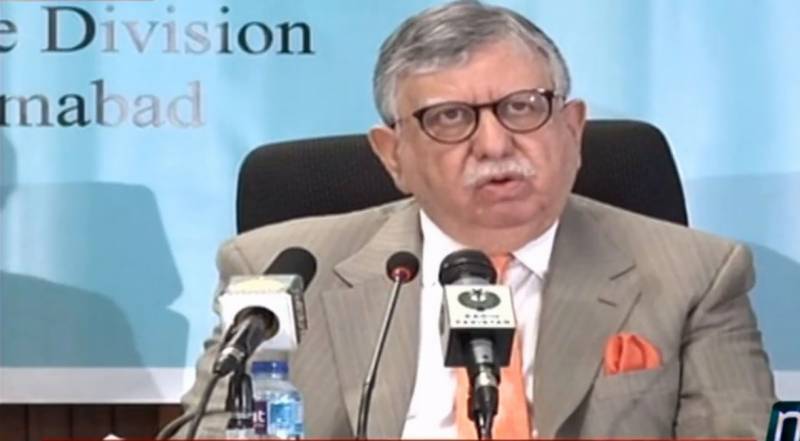 According to the survey presented by Minister for Finance Shaukat Tarin and accompanied by Minister for Industries and Production Khusro Bakhtiyar, Commerce Adviser Razak Dawood, Special Assistant on Poverty Alleviation Sania Nishtar and SAPM on Revenue Waqar Masood, Pakistan’s economy rebounded strongly during the current fiscal year and posted a growth of around four percent, which is substantially higher than the previous two years.

The construction sector recorded growth of 8.3 percent. The IT sector witnessed growth of 18. 85 percent which is the highest growth in comparison with all other industries and the highest in the region.

During the current fiscal year, the total revenue as percent of GDP stood at 15.1 percent whilst total expenditures at 23.2 percent. Thus, fiscal deficit stood at 8.1 percent.

During July-March of this fiscal year, expenditures under the PSDP stood at 653.9 billion rupees.

Shaukat Tarin said remittances grew by 29 percent this year, which shows overseas Pakistanis' trust in Prime Minister Imran Khan. He said the remittances have so far reached 26 billion dollars and these are expected to increase to 29 billion dollars by the close of this fiscal year.

The Survey revealed that Pakistan's exports bounced back after a sharp hit during strict lockdown in the last fiscal year, mainly due to export oriented government policies and strong economic recoveries. By April, exports were amounted to 20.9 billion dollars as compared to 18.4 billion dollars in the same period last year which shows an impressive growth of 13.6 percent.

The imports stood at 44.7 billion dollars during the ten months of current fiscal year as compared to 37.9 billion dollars in the same period last year. He said the inflow of dollars including through exports helped maintain the current account deficit in surplus over the last ten months.

Foreign Exchange Reserves stood at 22.7 billion dollars in the first ten months of current fiscal year. Out of this, the SBP's reserves were 15.6 billion dollars whereas reserves held with the commercial banks were 7.1 billion dollars. Pakistan's rupee strengthened against the dollar, effectively appreciating the rupee by 9.5 percent.

The survey disclosed that health related expenditure increased by 14.3 percent.  Under this year's PSDP, allocations of 20,193. 9 million rupees were made for seventy one health sector projects.

The government earmarked 29.5 billion rupees for the Higher Education Commission to implement 144 development projects of Public Sector Universities. The literacy rate in urban areas is 74 percent whilst in rural areas it stands at 52 percent.

In the wake of COVID-19, the government disbursed 179.8 billion rupees as one time emergency cash assistance to 14.8 million beneficiaries who were at the risk of falling into the extreme poverty.

Under Kamyab Jawan Youth program, the government disbursed 8,566 million rupees by April this year for businesses.

The minister said one billion trees have been planted under Ten Billion Tree Tsunami project.

Expressing satisfaction over the trends in Pakistan Stock Exchange, he said it has emerged as the best in Asia. He said there are 182 million cellular phone users and 100 million broadband subscribers in the country.

Tarin said it was due to the farsighted and prudent decisions that the country saw economic recovery. He said incentives were especially given to different sectors, including construction, manufacturing and textiles besides interventions were made in agriculture sector. Bumper crops of wheat, sugarcane and maize gave a push to the agriculture growth.

Shaukat Tarin said the government's stabilization program remained successful but now we will shift to growth. He said we will have to target higher growth to provide job opportunities to the youth. The Finance Minister said there will be special interventions in the budget to take care of the poor segments of the society and bring improvement in their living standards.

Shaukat Tarin said despite increase in the prices of commodities such as crude oil, palm oil, sugar, wheat and tea in the international market, these have not been fully passed on to the consumers. He said our vision is to make Pakistan food exporter country by supporting the agriculture sector. He said the government is also establishing strategic reserves of major commodities to check their prices.

The minister said the government is giving importance to better manage the power sector and address the issue of circular debt.

Shaukat Tarin said six SEZs under the CPEC are ready to receive investment. He said we are encouraging the Chinese friends to make their investments in the zones, stressing that bolstering exports is important for the economy.