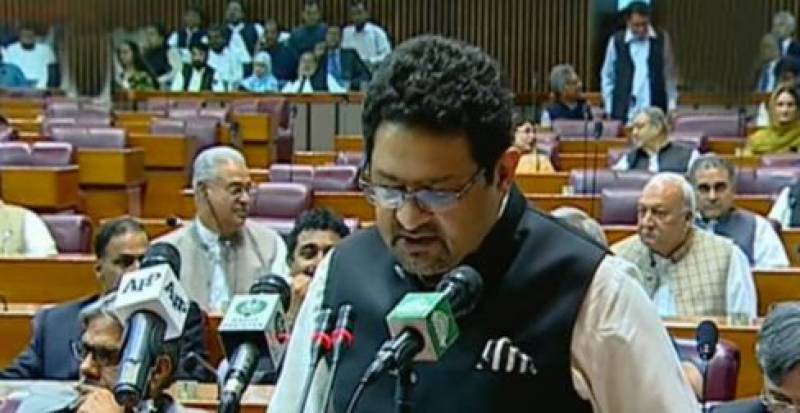 Presenting the budgetary proposals for the next fiscal year in the National Assembly on Friday, Finance Minister Miftah Ismail said Rs3950 billion will be spent on debt servicing. He said that a budget of Rs800 billion has been earmarked for the next year's PSDP. He said Rs1523 has been set aside for country's defence and Rs550 billion for civil administration's expenditure. Besides, Rs530 billion have been allocated for pension, while Rs699 billion for targeted subsidies for the benefit of the poor people. An amount of Rs1242 billion has been proposed for grants, which include the grants of Benazir Income Support Programme, Bait-ul-Mal and other departments.

The minister said that FBR revenue has been estimated at Rs7004 billion for the next fiscal year. This includes Rs4100 billion share of provinces. The net revenue with the Federal Government will be Rs4904 billion. The non-tax revenue will be 2000 billion rupees.

The FM said the budget of BISP has been increased to Rs364 billion for the next fiscal year.  In addition, Rs12 billion have been allocated for provision of subsidy on essential commodities through Utility Stores Corporation. An additional amount of Rs5 billion has been set aside for Ramadan Package. He said the facility of Benazir Kafalat Cash Transfer Programme will be available to nine million deserving families under BISP in the next fiscal year. For this, Rs266 billion have been reserved.

Miftah Ismail said that the scope of Benazir Education Stipend Programme will be expanded to ten million children. Over Rs35 billion have been proposed for this programme. Ten thousand more students will be given Benazir Undergraduate Scholarship at a cost of Rs9 billion rupees. The network of Benazir Nashonuma Programme will be expanded to all the districts, which will cost about Rs21.5. Besides, Rs6 billion have been set aside for Pakistan Bait-ul-Mal for the medical treatment and assistance of deserving families.

The minister maintained the premier Shehbaz Sharif wants to extend maximum relief to the people, especially the poor during these difficult times.

For this purpose, the government has taken several steps to provide subsidy and assistance. He, however, said that the continuation of this will require more resources.

To achieve this, there is a need to impose special tax on higher income earnings in order to divert the resources to the poor people.

The minister said our budget philosophy is to enhance agriculture production, especially the edible oil in order to reduce agricultural imports, separately. We need to promote industries to bolster exports and earn valuable foreign exchange. This, he said, will help address the issue of balance of payments on permanent basis.

Miftah Ismail stated that the energy sector has pivotal importance for the people as well as the industries and trade. For these sectors and the people we gave an additional subsidy of Rs214 billion.

He said Rs573 billion have been earmarked in the next financial year so that the people could afford the electricity in the harsh weather of summer. He said we released Rs248 billion for the payment of outstanding amounts in the petroleum sector and Rs71 billion will be provided in the next fiscal year. He said we will soon announce the new gas tariffs which will be aimed at providing gas to the industries at competitive rates which will help in bolster exports.

The minister said we have earmarked Rs65 billion in the current budget for Higher Education Commission. In addition Rs44 billion have been allocated for the development schemes of the HEC which is 67 percent higher than the previous year. He said this is manifestation of our commitment towards the youth.  He said we are encouraging the provinces to fully fulfill their responsibilities regarding promotion of higher education in the coming years.The HEC budget envisages five thousand scholarships for the students of Balochistan and tribal districts.  He said a separate scholarship scheme has also been included for the coastal areas of Balochistan.

The FM announced to provide one hundred thousand laptops on easy installments to the students across the country. Funds have also been allocated for provision of state of the art equipment to upgrade education of engineering and technology.

Miftah Ismail also announced fifteen percent increase in the salary of government employees along with merger of the adhoc allowances. He said the tax exemption slab for salaried class has also been increased from Rs600,000 to Rs1.2 million. This step will be benefit the salaried people and enhance business activities. The slab for business individuals and associations of persons has been increased from Rs400,000 to Rs600,000. He said tax on profit of Saving Certificates, Pensioners Benefit Accounts and martyrs family welfare accounts has been slashed from 10 to 5 percent.

The minister said a new fixed income and sales tax system is being introduced for small retailers. Under this system, tax ranging from Rs3,000 to Rs10,000 will be collected through electricity bills. This will be a final settlement and FBR will not be entitled to ask any questions about this tax.

Miftah Ismail said there is a proposal to increase initial depreciation charges for industries and other businesses from 50 percent to 100 percent in the first year.

Besides, he said all the taxes from industrial units during import of raw material will be considered as adjustable to protect working capital of the business community.

Miftah Ismail said that Rs21 billion have been earmarked to enhance production of crops and livestock. He said that Ministry for Food Security has prepared a three year growth strategy in collaboration with Planning Commission and provinces.  This strategy is aimed at enhancing agri-production, making the farmers prosperous, promoting smart agriculture and self-reliance.

The minister announced formation of National Youth Commission in order to exploit the potential of the youth. He said various schemes have been proposed for the youth. He said a coordinated system is being introduced to enhance the role of educated youth in the country's development. He said more than two million job opportunities will be provided to the youth through youth employment policy.

The FM said a scheme will also be started to promote youth entrepreneurship under which interest free loans of up to Rs500,000 and loans up to Rs25 million will be provided on easy installments. He said that twenty-five percent quota has been fixed for women in this loans scheme. He said that women will be given training on priority basis in hi-tech in order to ensure the economic empowerment. He said youth development centres will be established across the country.

Miftah Ismail said that a green youth movement will be started in order to engage the youth in activities aimed at environment protection. Funds will be set aside to provide laptops on merit and on installments besides 250 mini-sports stadium will be constructed in the country.  He said that an innovation league will be introduced in order to enhance the capabilities of the youth.  He said a talent hunt and sports drive programme will be framed for the youth in the age bracket of eleven and twenty-five years.

The FM said austerity is the top priority of the present government. Reducing government's expenditure is part of this budget and we are taking concrete steps in this regard. He said there will be complete ban on purchase of vehicles. Except, development projects, there will also be a ban on procurement of furniture and other items. The petrol quota of cabinet members and government officials will be reduced by 40 percent. There will also be ban on foreign tours under government expense, except the important ones.

According to the vision of Prime Minister, Miftah Ismail said a medium term macro economic framework has been prepared to put the economy on the path of development. He expressed the confidence that we will be able to put the economy in the right direction through this framework. He said our biggest challenge is to achieve growth without Current Account Deficit. Therefore at least five percent will be achieved without disturbing the balance.

Miftah Ismail said the GDP will be enhanced from Rs67 trillion to Rs78.3 trillion during the next financial year. He said we are trying to reduce inflation by better fiscal and monetary policies. The inflation will be reduced 11.5 percent during the next fiscal year. He said the tax to GDP ratio is estimated to the increase to 9.2 percent from the current 8.6 percent during the next financial year. He recalled that we had left this ratio at 11.1 percent in the year 2017-18. He said the overall deficit which currently stands at 8.6 percent will be gradually brought down. This will be brought down to 4.9 percent in the next fiscal year. Similarly, the overall primary balance which is currently -2.4 percent of the GDP will be improved to 0.19 percent.

The remittances which will remain $31.1 billion during the current fiscal year are expected to rise to $33.2 billion in the upcoming fiscal year.