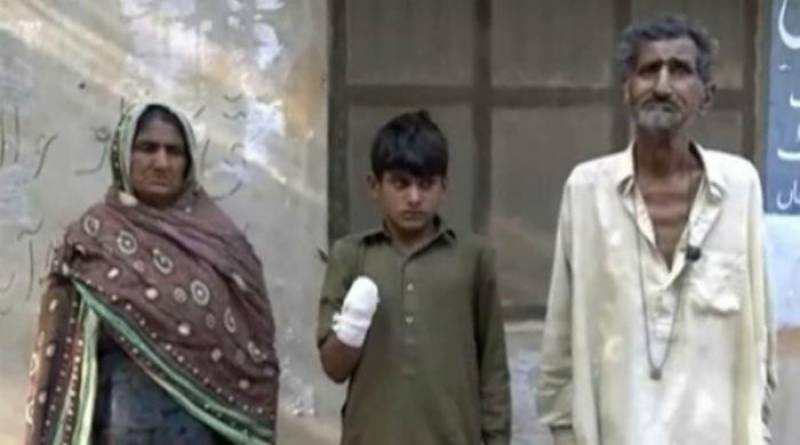 Islamabad (Staff Report): Chief Justice of Pakistan Justice (CJP) Mian Saqib Nisar on Wednesday took suo motice notice of the Sheikhupura incident in which a landlady cut the hand of her 13-year-old domestic help for refusing to feed cattle.

The CJP ordered the Inspector General Police of Punjab to submit a report regarding the incident within 48 hours.

Justice Nisar took notice of the incident after media reports claimed that the lady employer allegedly cut the right hand of her 13-year-old domestic help, identified as Muhammad Irfan, with a fodder machine in Wahiwala village.

The local police registered a case against four people on Tuesday on the orders of a lower court for allegedly chopping off help's hand.

The police registered the case against the employer Shafqat Bibi, her brother Zafar Tarrar and two others and arrested Zafar.

Irfan was employed at Rs 3,000 per month by the landlady.

According to the boy’s mother, around 10 days ago, the boy, starving, had refused to feed the animals. On this Shafqat Bibi got enraged and put his hand in a fodder-cutting machine.

Chief Minister Shahbaz Sharif has also sought a report from the Sheikhupura regional police officer about the incident.