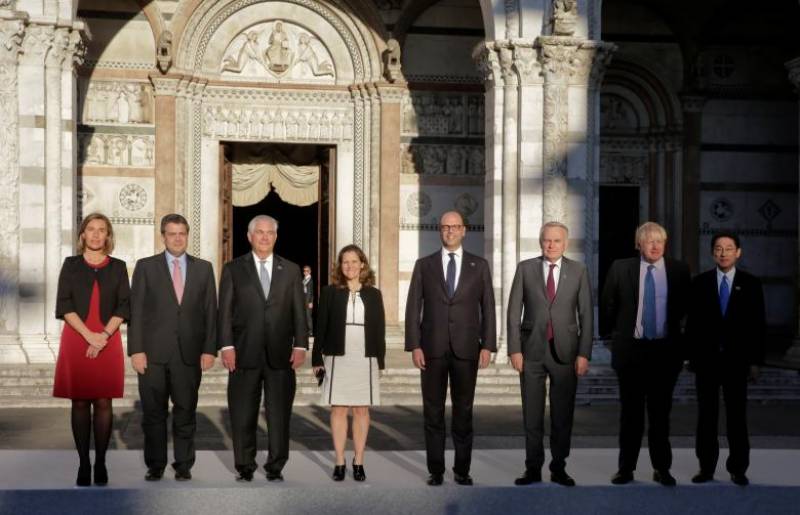 Lucca, Italy (Reuters): The Group of Seven major global powers will be joined by Middle East allies on Tuesday in a push to isolate Syrian President Bashar al-Assad, hours before the U.S. secretary of state flies to Moscow, Assad's top backer.

G7 foreign ministers hosted by Italy invited their counterparts from Turkey, Saudi Arabia, United Arab Emirates, Jordan and Qatar - all of whom oppose Assad's rule - to sit down in the morning and discuss Syria.

Pressure on Russia to break its ties with Assad, who stands accused of launching a nerve gas attack on a rebel-held town last week, appeared to be building on Monday.

Britain and Canada said sanctions could be tightened on Moscow if it continued to back Assad as the civil war, now in its sixth year, drags on.

"I think we have to show a united position and that in these negotiations we should do all we can to get Russia out of Assad's corner, at least to the point that they are ready to participate in finding a political solution," German Foreign Minister Sigmar Gabriel said on Monday.

"It is the right moment to talk about this, how the international community, with Russia, Iran, Saudi Arabia, Europe, with the U.S., can drive forward a peace process for Syria and avoid further military escalation of the conflict."

On Friday, the U.S. fired missiles at a Syrian air base in retaliation for the alleged chemical weapons attack by Assad's government on civilians, including many children.

That has increased expectations that President Donald Trump is ready to adopt a tougher stance with respect to Russia, and that he is ready to engage in world affairs instead of following the more isolationist stance he had previously taken.

Up until the chemical attack, Trump had said Washington would no longer act as the world's guardian, especially if it was not in the interest of the United States.

But on Monday, U.S. Secretary of State Rex Tillerson visited the site of a World War Two Nazi massacre in Italy and said Washington would never let such abuses go unchallenged.

"We rededicate ourselves to holding to account any and all who commit crimes against the innocents anywhere in the world," Tillerson told reporters in Sant'Anna di Stazzema.

G7 efforts to build a united front against Assad come just ahead of Tillerson's planned trip to Moscow, the first for a high-ranking Trump administration official.

Russia has rejected accusations that Assad used chemical arms against his own people and has said it will not cut its ties with the Syrian president.

That means Tillerson, who has significant business experience with Russia as a former chief executive at Exxon Mobil but none in government, is about to face his toughest test yet in international diplomacy.

Besides Syria, the ministers will talk on Tuesday about Libya, where people smugglers operate with impunity and rival governments and militias vie for power.

Growing tensions with North Korea are also expected to be on the agenda, as the United States moves a navy strike group near the Korean peninsula amid concerns over Pyongyang's nuclear ambitions.

PPP not to support amendment in Article 62 and 63: Khursheed Shah