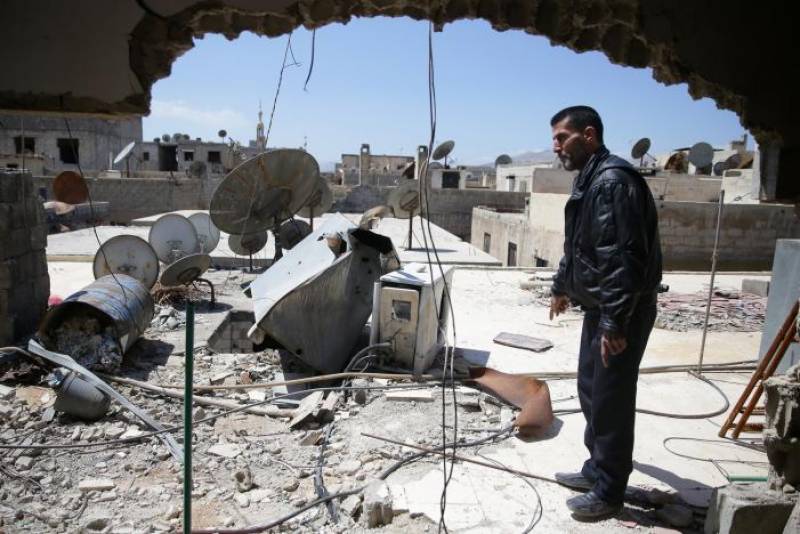 Damascus (Web Desk): It's the dead children that still haunt Abu Ghassan, who was blinded for more than a month and paralysed for weeks by a nerve gas attack four years ago in a Damascus suburb. He recovered; 37 members of his family were among the hundreds of dead.

Last week, when another gas attack killed at least 87 people hundreds of miles to the north, the memories rushed back, hard. When he learned of it, he wept "like a child", the 50 year-old recalls in Ain Tarma, one of three towns hit by poison gas in 2013 in areas near Damascus collectively known as the Ghouta.

Last week's attack in the northern town of Khan Sheikhoun was the first time Western countries say the government of Syrian President Bashar al-Assad again used the banned nerve gas sarin since the attack four years ago in the Ghouta.

Damascus denies it was to blame for either attack, but the diplomatic effects of both were dramatic. Four years ago, the United States nearly bombed the Syrian government, only to pull back when Assad agreed to give up his chemical arsenal and submit to U.N. inspections. After last week's attack, President Donald Trump fired U.S. cruise missiles at Syrian government targets for the first time.

Survivors of the Ghouta attack four years ago never lost the fear they could be gassed again at any moment, said Amer Zaydan, a 28-year-old school director from another part of eastern Ghouta. The new strike hammered it home.

"After the Khan Sheikhoun massacre, we've gone back to that first moment, as if we are the ones who went through it," he said. "The people here are terrified."

Since last week's attack - which like those four years ago came just before dawn when the wind is the calmest and poison gas most effective - residents have activated a night watch, staying up to warn others in case of another attack.

Zaydan recalls seeing hundreds of dead people before falling unconscious himself as he tried to help victims. He was blinded for days. "It was like the end of days."

"I don't know what happened to the child I was holding at the time," said Zaydan. Seven members of his family were killed. One of his cousins, presumed dead, was being prepared for burial when it was discovered he was still alive.

"We have not forgotten this thing. It cannot be forgotten, when you see hundreds of people dying, it's a scene that cannot possibly be forgotten," he said. "You walk through a district, you remember that here an entire family died, or here an entire district died."

Abu Ghassan in Ain Tarma also lives with the constant fear of another strike.

He says he was saved only by his military training, covering his face with a wet shirt when he first sense the poison, while none of the friends he was with survived. Since then, he has always kept cloth and vinegar to hand in case of another attack.

Pieces of a rocket that bore the poison still litter the rubble-strewn floor of the apartment that it struck. Some parts were taken by U.N. inspectors, but the rest was kept in case it can one day be used in a war crimes tribunal, Abu Ghassan said.

Residents have returned to live in most of the apartment block. Abu Ghassan remembers returning home to the sight of dead birds and chickens in the street by the house.

Today, Syrian government forces are in a much stronger position than they were four years ago, and the opposition-held areas are even more vulnerable. The western Ghouta, where one of the strikes hit, is now under government control.

The eastern Ghouta, where two towns were hit, has been effectively under siege for years and more vulnerable than ever, say doctors, who have never been able to replenish supplies of atropine, the medicine used to treat nerve gas patients.

"After the massacre in Khan Sheikhoun, it's like the Ghouta is on high alert. We feel as though we are next," said Abu Ibrahim Baker, a surgeon who treated victims of the attack four years ago at two hospitals.

"If God forbid a massacre happens like the 2013 one, there will be three or four times the deaths, because we no longer have as much atropine or capacities to resist at all."

Hammam Daoud, a doctor who was in western Ghouta during the 2013 attack, said he was immediately struck on seeing the images last week of bodies gone limp and patients foaming at the mouth.

"The pictures we saw from Khan Sheikhoun were similar to what we saw. The pictures of the victims, the symptoms were almost identical," said Daoud, speaking from Turkey, where he moved a few months ago as part of a negotiated withdrawal that gave Assad's opponents safe passage out of the area.

"It is hard to talk about, it was greater than anything you expect. Medically, the thoracic symptoms did not cease, no one was 100 percent better, and we were unable to treat them well, because we had no tools," he said in a phone interview.

Seeing footage from Khan Sheikhoun, he said he felt "the same level of despair".

"This despair will not leave us. The helplessness you feel because of these cases, it is unmatched," he said. "I lost hope in everything."