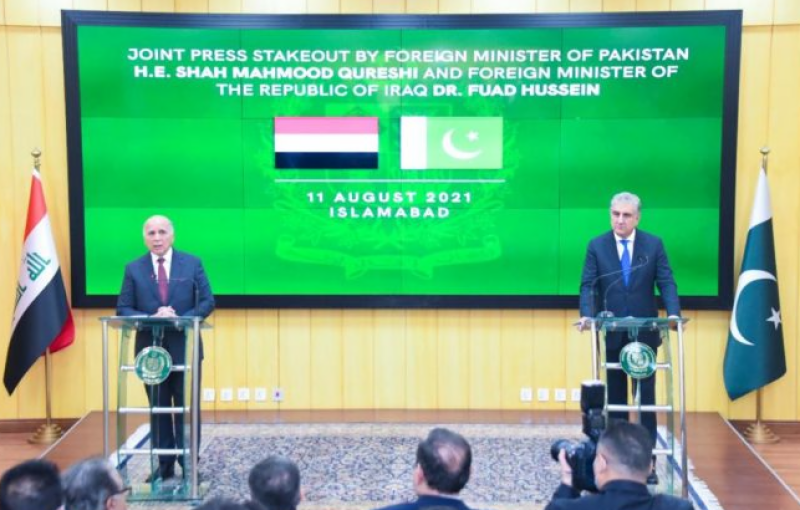 Islamabad (Web Desk): Foreign Minister Shah Mahmood Qureshi and his Iraqi counterpart Fuad Hussein on Wednesday expressed concerns over the escalation of violence in Afghanistan, saying dialogue was the only way forward to resolve the situation in the war-torn country.

The two leaders held delegation-level talks on a wide range of matters of bilateral, regional and international importance.

Addressing a joint press conference after the talks, FM Hussein said the two foreign ministers had discussed the Afghan issue and were worried about the situation in the war-torn country.

The Iraqi foreign minister said his country was worried about the Afghan situation.

He acknowledged that Pakistan was playing an important role in the matter, adding that he was confident "Pakistan wants to have peace in Afghanistan and believes in the various political groups coming together and working together to be partners."

Speaking on the occasion, Foreign Minister Shah Mahmood Qureshi said that Pakistan was “consistently advocating” a reduction of violence in Afghanistan.

FM Qureshi termed the anti-Pakistan trends on social media as a part of a "smear campaign" against the country to distract attention from internal challenges in Afghanistan.

He said though Pakistan sympathised with Afghanistan it would not shy away from saying "what we believe in because of our clear approach".

"We are sincere in the peace process and we will not be apologetic because we have done whatever we could and will continue to do what we can for peace, stability and regional connectivity."

Qureshi reiterated Pakistan has no favourites in Afghanistan. “It is up to the people of Afghanistan. They have to sit and work what kind of future they want for their country, Pakistan will only facilitate,” he added.

Speaking about Pakistani pilgrims visiting Iraq, Fuad Hussein said that every possible facilitation would be extended to Pakistanis visiting holy places in Karbala and Najaf.

The Iraqi FM added he would discuss with the Iraqi interior minister to “make it easier for Pakistani pilgrims visiting Iraq”.