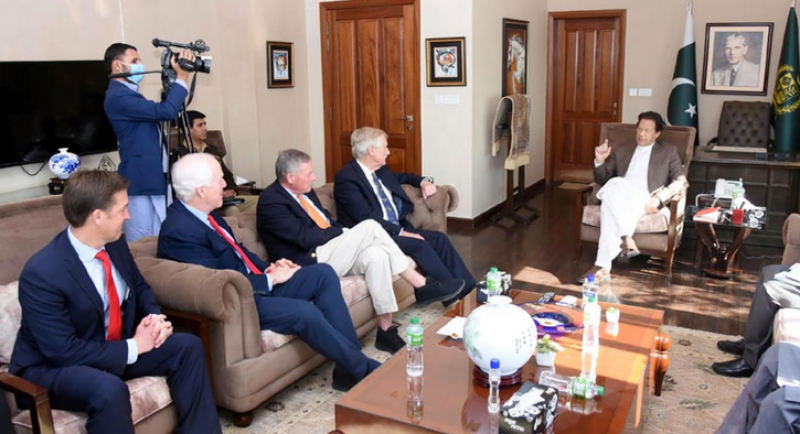 Islamabad (Web Desk): Prime Minister Imran Khan on Saturday stressed that a deeper and strong partnership between Pakistan and the United States (US) is mutually beneficial and critical for region's peace, security and prosperity.

The prime minister, in a meeting with a four-member US Senate delegation including senators Angus King, Richard Burr, John Cornyn and Benjamin Sasse, particularly underscored the urgent need to support the Afghan people by taking all possible measures to prevent a humanitarian crisis and economic collapse.

He also highlighted the importance of closer cooperation to address the security threats in the region, including terrorism.

All four senators are members of the Senate Select Committee on Intelligence, while Senator King is also a member of the Senate Armed Services Committee.

Warmly welcoming the senators, the prime minister underlined that Pakistan valued its long-standing relationship with the US and was committed to expanding it in all spheres, particularly in the economic dimension.

He hoped that the visits of Congressional delegations would help strengthen mutual understanding and forge closer people-to-people contacts.

Regarding evolving situation in Afghanistan, the premier emphasized that Pakistan and the US must have deeper engagement to promote the shared objectives of peace, stability and economic development.

He particularly underscored the urgent need to support the Afghan people by taking all possible measures to prevent a humanitarian crisis and economic collapse.

Apprising the US delegation about the continuing egregious human rights violations in Indian Illegally Occupied Jammu and Kashmir (IIOJK), Imran Khan said that the extremist policies of the RSS-inspired BJP government in India are posing a threat to regional peace and security.

He said the US must play its role in the maintenance of peace and stability in the region.

“On its part, Pakistan is ready to pursue measures that would reinforce peace, stability and prosperity of the region, if the enabling environment is created by India,” PM Imran said.

The US Senators deeply appreciated Pakistan's recent contribution in evacuation of the American nationals and others from Afghanistan.

They reaffirmed their commitment to a stable and broad based Pakistan-US bilateral relationship.

The delegation said both the US and Pakistan should make determined efforts to promote trade, investment and economic cooperation.