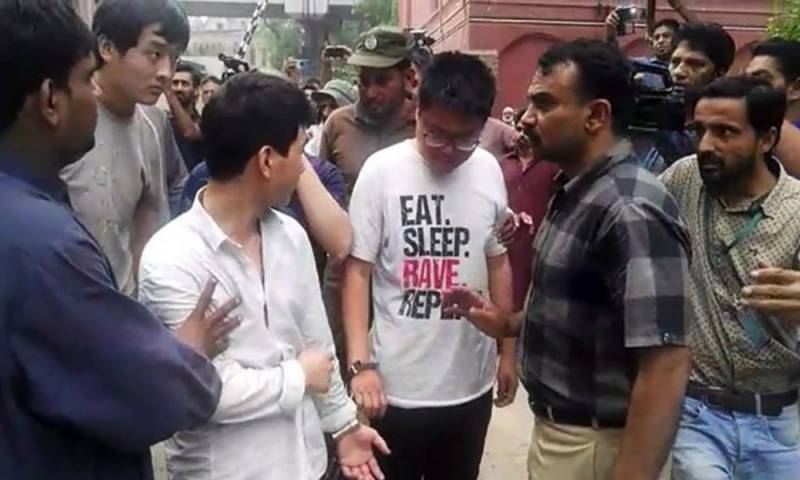 Federal Investigation Agency (FIA) officials produced the suspects before a judicial magistrate on completion of their physical remand and demanded an extension in their remand for further investigation.

The court also sent two alleged facilitators of the Chinese to jail on judicial remand till May 13. The Chinese nationals told the court that they were innocent and they had come to Pakistan for business.

The investigation officer in the case submitted his initial report in the court and sought more time for completion of the probe.

The Chinese nationals were arrested on a tip off from Lahore.

According to FIA, the suspects would approach marriage bureau agents who would take a commission from them and then have them married to Pakistani girls.

The FIA launched a crackdown in several cities of Punjab in which several Chinese nationals accused of trapping Pakistani women into fake marriages were arrested.

Meanwhile, the Chinese Embassy has denied media reports that Pakistan women were being forced into prostitution or sale of human organs.

“According to investigations by the Ministry of Public Security of China, there is no forced prostitution or sale of human organs for those Pakistani women who stay in China after marriage with Chinese,” the embassy said in a statement.

“A few criminals would not be allowed to undermine China’s friendship with Pakistan and hurt friendly feelings between people of the two countries, the statement added.

On Friday, the FIA arrested Chinese and Pakistani couples at Islamabad Airport as a crackdown against human trafficking continued.

According to officials, the arrested Chinese nationals appeared as married couples and were smuggling Pakistani girls to China. Two Chinese men and three Pakistani women were among those arrested by the agency, they added.

The FIA further said that the Chinese nationals were involved in organ trafficking.