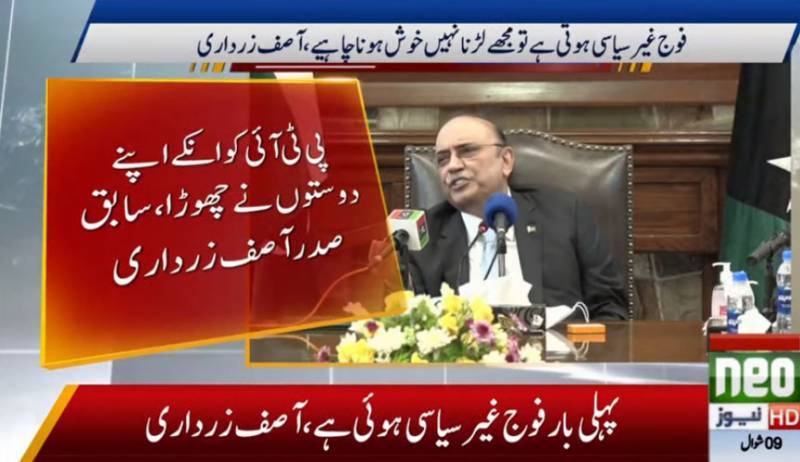 Addressing a press conference in Karachi, the former president said that electoral reforms will take three to four months.

The PPP leader said that he talked to Nawaz Sharif last night and tried to explain it to him about the situation.

"It is our joint decision that we will not go for polls until electoral reforms are done," the PPP co-chairman said, adding that he respects Khawaja Asif's remarks but elections will only take place after reforms.

He said the government will take all the coalition parties on board ahead of making decisions.

The Opposition is now calling for elections after the coalition parties formed a government.

Criticising the former premier, the PPP co-chairman asked: "What will PTI Chairman Imran Khan do by holding the elections soon. What has he done in the last four years for the nation?"

Asif Zardari said that the coalition government had "no issue" with voting rights and representation for overseas Pakistani, adding that a number of seats could be specified for them after discussions.

Reacting to the Khan's criticism of the army chief over his apolitical role, Zardari asked

"If army is acting neutral then you should solute the army chief General Qamar Javed Bajwa or should you start a fight with him?

Who is Imran to give labels like Mir Jaffar and Mir Sadiq to people," he said.

The former president said that the current situation has proved that institutions can remain neutral.

"Let the institutions work. In fact, you should help them," he advised the PTI chief.

The PPP leader said that that bureaucracy and the country were destroyed during the tenure of the PTI government, adding that those who are earning even Rs50,000 per month are living a life of hardship.

Elaborating on the issues facing the economy, the former president said oil was expensive which was why the country would hold a dialogue. Prime Minister Shehbaz Sharif had good relations with Saudi Arabia's ruling family, he noted.

Zardari said he wanted businesses to consult with the PPP, which would provide out-of-the-box solutions.

"We have to solve the problems ourselves, we can benefit by doing trade with the neighbouring country," he added.

Zardari said the country would keep facing difficulties until the International Monetary Fund (IMF) programme was brought back on track.

Responding to a question about the alleged US conspiracy to topple the PTI-led government, as claimed by Imran Khan, the former president said that he has not read the "threat letter".

"I do not believe any [US] State Department official is irresponsible enough to [say] what you have read out to me. There is no such thing. He (Imran) has created a political myth. What need does the US have [to interfere]?"

Zardari said that President Biden is his friend and if this was true then he would've called him.

The former president said Pakistan needed to correct its policies and portray itself as a safe haven so the international community would consider it as a partner.