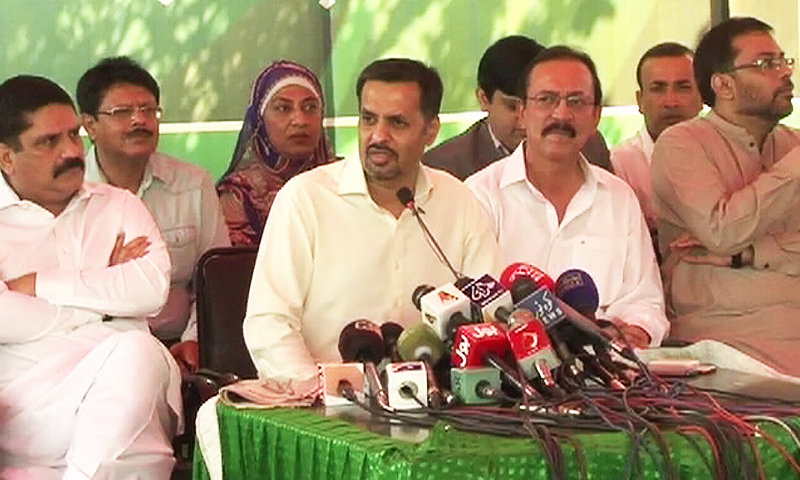 Karachi (Staff Report): Mustafa Kamal claimed on Saturday that the establishment had been calling Pak Sarzameen Party (PSP) from last eight months to meet Muttahida Qaumi Movement-Pakistan (MQM-P). He alleges that this was done at the request of MQM-P chief Farooq Sattar.

While addressing a press conference, PSP chief said the impression was being ingrained into the minds of all Pakistanis that the establishment of the country was behind the political alliance between MQM-P and PSP at Mustafa Kamal’s request.

He further said that the alliance did not happen within 48 hours, but the meetings have been taking place on the wishes of Farooq for past eight months.

Taking a jibe at Farooq Sattar, PSP chief said that MQM-P was made under the vigilance of the establishment.

“One should not forget that Farooq was taken to Rangers headquarters after Altaf’s August 22 speech,” he said while adding that after that he became leader of the MQM after being released by the Rangers.

Kamal alleged that founder of the MQM Altaf Hussain was an agent of Indian spy agency and that Farooq still refrains from speaking against him.

Referring to his joint-press conference with PSP chairman Mustafa Kamal, Sattar had said at a press conference on Thursday: "We were left disappointed. Kamal agreed to unite with me and in front of me he said the MQM belongs to its founder," said Sattar.

"Muhajirs and their mandate was insulted yesterday," he had said.