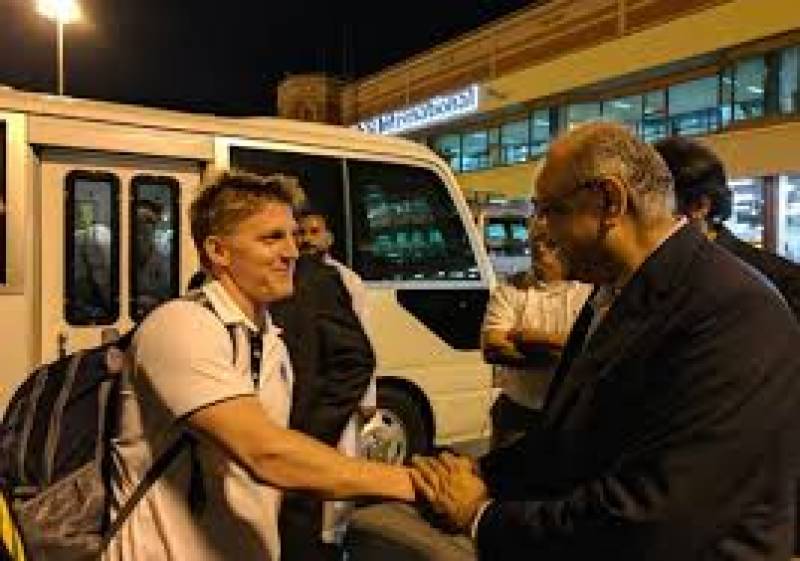 According to details, amid tight security, Pakistan Cricket Board chairman Najam Sethi welcome the star-studded team, led by South Africa's Faf du Plessis, at the airport and then they were being transported to hotel at Mall Road.

Some 8,000 police and paramilitary forces will guard teams as they travel back and forth from Lahore's Gaddafi Stadium.

Roads and shops will be closed around the 27,000-capacity venue, while spectators will have to pass through multiple security checkpoints.

The coach of World XI,Andy Flower said upon arrival that he was looking forward to a good series against Pakistan.

Flower said, "It's great to be here; we're looking forward to seeing a lot of you watching the great cricket we put on the show."

He added, "We've had a warm welcome. Thank you very much."

The World XI is scheduled to play a three match T-20 series that will be held on September 12, 13 and 15 in Gaddafi Stadium. The team has arrived in Pakistan today (on September 11th). In a historic series which sees international cricket return to the country after a drought of eight years, barring a brief tour by Zimbabwe in 2015.

The PCB is optimistic that the series will close that dark chapter for good, and allow a new generation of players to experience the thrill of playing before a home crowd for the first time.

Only five members of the current squad have done that before, skipper Sarfraz Ahmed, Shoaib Malik, Imad Wasim, Sohail Khan and Ahmed Shehzad.