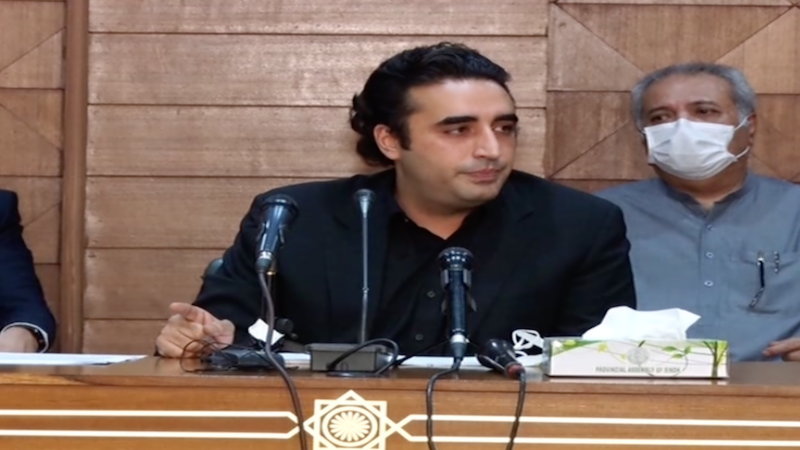 Karachi (Web Desk): The Central Executive Committee (CEC) of Pakistan Peoples Party (PPP) has asked all the party members to resign from their positions in the opposition alliance Pakistan Democratic Movement (PDM).

Addressing a press conference after a crucial meeting of his Party’s CEC, PPP chairman Bilawal Bhutto Zardari said that the executive body of the party has rejected the show-cause notice issued to the PPP by other PDM parties.

The PPP chief said that the party members will resign in protest of the attitude, conduct and actions of other office-bearers of the PDM.

Bilawal said that the CEC had come to the conclusion that resignations from the national and provincial assemblies should be "like an atom bomb".

“If PPP had agreed with the view of the other PDM parties and boycotted the election then the PTI would have won those seats and it would have been a sad day for Pakistan,” Bilawal said.

The PPP chief said that the government was defeated in the Senate and defeated on its pitch.

He said those who wanted to resign from the Parliament, should do so.

Bilawal Bhutto stated that doors of PPP are always open for those fighting against the incumbent government of PTI.

He said that both politics and politics of alliance were done with "respect and equality".

"The PPP CEC demands an unconditional apology to the ANP and the PPP for this obnoxious conduct," he said, adding that the PPP stands by the ANP in this regard and will not abandon them under any circumstances he said.

“For opposition politics to succeed, there must be working relationships within opposition parties and that there was no concept of show-cause notices in democratic movements,” Bilawal added.

Last week, the Awami National Party (ANP) on Tuesday announced to quit the anti-govt Pakistan Democratic Movement (PDM) following the issuance of show-cause notice by the secretary general of the alliance.

Addressing a press conference, ANP senior vice president Ameer Haider Khan Hoti said that all party leaders have quit from all posts of the PDM.

"After receiving the show-cause notice, ANP's political leadership has decided to part ways with the PDM," Hoti stated.

On April 5, PDM served show-cause notices to Pakistan People’s Party (PPP) and ANP over alleged violation of the consensus decision and principles of the opposition alliance.

As per the notice, PPP had been asked to explain within a week, the appointment of its candidate Yousuf Raza Gilani, as Leader of Opposition in Senate, by defying the consensus decision by other parties of the Opposition alliance.

The ANP had been directed to clarify why it had supported PPP in this move.

The show cause notice had directed both the parties to revert within 7 days.

Earlier, the PDM has decided to part ways with the PPP and ANP, and form a new alliance of five opposition parties having 27 members in the Senate.