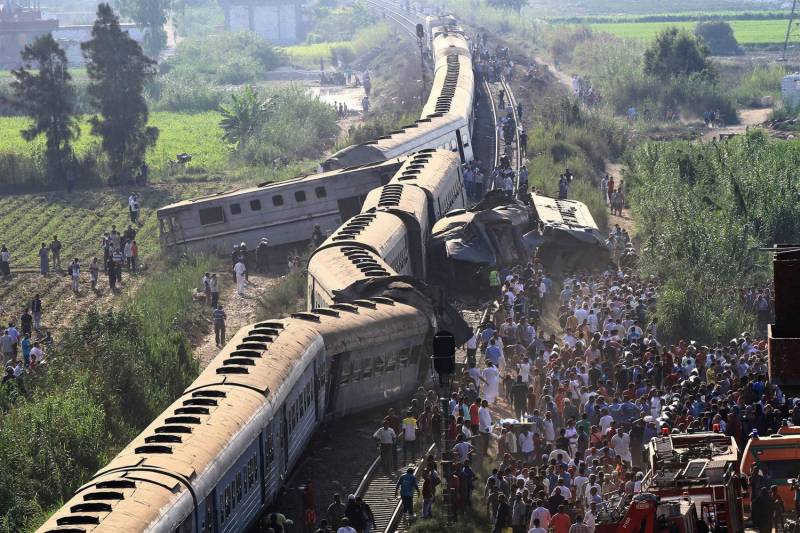 A witness said the trains rose into the air "forming a pyramid" as they slammed into each other just outside a suburban station in the Mediterranean port city.

President Abdel Fattah al-Sisi ordered an inquiry into the crash, which left bodies strewn on the ground as rescue teams worked to pull the dead and injured from the wrecked carriages.

The collision at 2:15 p.m. (1215 GMT), near Khorshid station at the edge of Alexandria, derailed the engine of one train and two cars of the other, the Egyptian Railway Authority said.

A railroad switching error was the most likely cause, a security source said without giving further details.

Transport Minister Hisham Arafat said "human error" led to the collision but did not elaborate.

"In order to avoid it, we have to develop the infrastructure," he told state television. A project was under way to improve the area's facilities, but such plans took time and money, he said.

One resident, Hoda, was standing on her rooftop when she saw the trains plow into each other. "They rose in the air forming a pyramid when they collided," she said. "I started to scream from the rooftops for people to grab some sheets and run."

"The train I was riding was going very quickly," said passenger Moumen Youssef. "I found myself on the floor. When we came out, we found four train cars crushed and a lot of people on the ground."

Egyptians have long complained that successive governments failed to enforce basic safeguards for the railways. A string of crashes have further inflamed public anger over the antiquated transport network.

In 2012, a train rammed into a school bus south of Cairo and killed 50 people, mostly children.

In Egypt's worst train disaster, a fire tore through seven carriages of an overcrowded passenger train in 2002, killing at least 360 people.