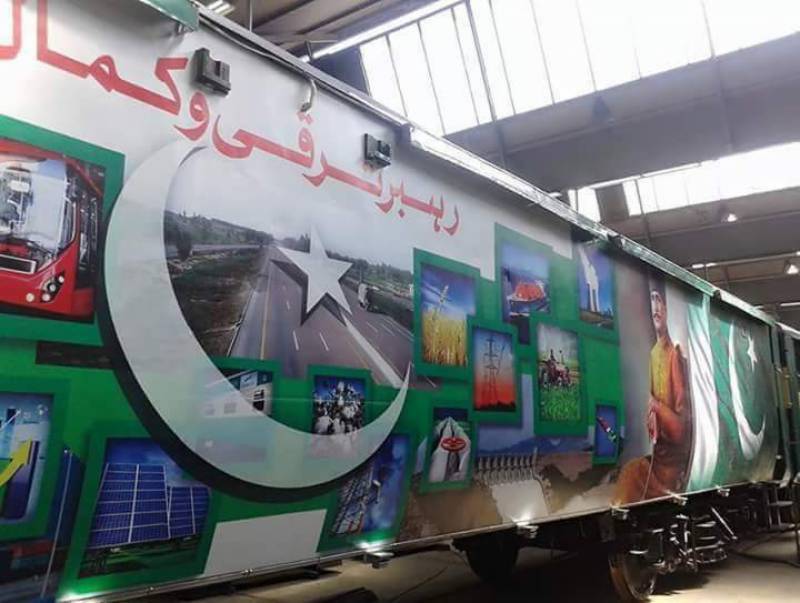 Addressing the inaugural ceremony of Azadi train, Maryam said Pakistan is emerging as an economic power, which is also being recognized by the international community.

The Azadi train consists of five art galleries, illustrated with pictures of people who sacrificed their lives during the independence movement, while six floats are also part of the train.

Sacrifices of Pakistan Armed Forces and Indian aggression in occupied Kashmir have also been displayed at the picture galleries.

According to the schedule, the train leaves Islamabad at 12:30pm today and will reach Peshawar at 4:30pm on the same day.

It will restart its journey at 10:30am on the next day from Peshawar and arrive at Rawalpindi at 7:15pm, where it will stay for two nights.

The train will again set off at 9:15am on August 15 for the next destination, Lahore, where it will reach at 10pm.

It will stay at Lahore station for two nights and leave for Multan at 9am on August 17. It will arrive at Multan at 11:30pm and after a night’s stay, start its journey at 9am and reach Khanpur at 7:19pm on the same day.

The Azadi train will stop at Khanpur for one night and on August 19 at 8:30am, it will depart Khanpur for Sukkur, where it will reach at 8pm.

After a night’s stay at Sukkur, the train will leave 9:30am on August 20 and will break its journey at Sibbi at 7pm to stay for the night.

The train will leave Sibbi at 7am on August 21 for its next destination Quetta, where it will reach at 5pm.

The train will stay there for two nights and start its journey back to Sukkur at 7am on August 23. It will reach Sukkur at 7:30pm and stay for another night and on August 24, it will leave for Nawabshah at 8am.

It will reach Nawabshah at 7pm and then reach Hyderabad via Tando Adam.

The train will stay at Hyderabad for one night and leave for Karachi Cantt via Kotri. It will conclude its journey in Karachi at 6pm on Aug 25.