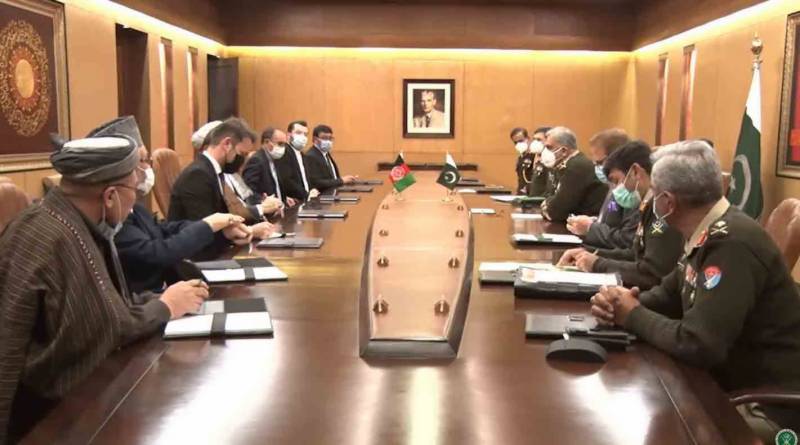 Rawalpindi (Web Desk): Chief of Army Staff (COAS) Gereral Qamar Javed Bajwa on Tuesday said that a stable and prosperous Afghanistan at peace with itself and its neighbours is in Pakistan’s national interest.

According to the Inter-Services Public Relations (ISPR), the COAS said this while talking to Chairman Hizb-e-Wahadat Islami Afghanistan, Mohammad Karim Khalili, who called on him at the General Headquarters (GHQ) in Rawalpindi.

The statement by the military’s media wing added that matters of mutual interest, peace and stability in the region, connectivity, and current developments in the Afghan Peace Process were discussed during the meeting

The visiting dignitary appreciated the positive role played by Pakistan and Army Chief's vision on future of Pak-Afghan relations, the ISPR said.

During the meeting, the foreign minister reaffirmed Pakistan's commitment to continue its efforts for peace and stability in Afghanistan.

He expressed satisfaction over the progress in intra-Afghan dialogue.

Shah Mahmood Quresh said that this is a unique opportunity for Afghan leadership which must be seized for peace in the region.

The foreign minister regretted that India is acting as a spoiler in Afghanistan, adding that Pakistan has presented evidence to the world community in this regard.

Referring to historic relations, FM Qureshi said that Pakistan is taking concrete steps for promotion of bilateral relations between the two countries.

He said Pakistan has also introduced a new visa policy to facilitate the Afghans.

The foreign minister said that Pakistan desires early but dignified return of the Afghan refugees to their homeland.

He also thanked Pakistani leadership and people for hosting the Afghan refugees for many decades.