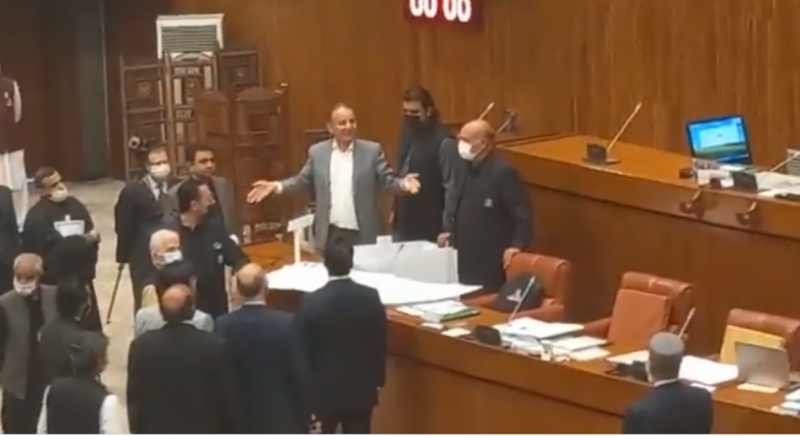 Islamabad (Web Desk): All the 48 newly-elected Senators took oath at the specially convened Senate session at the parliament house in Islamabad on Friday.

Senator Sayed Muzafar Hussain Shah, who has been nominated as the presiding officer, administered the oath to the members-elect shortly after the session started at 10am.

After oath taking, the members signed the roll of members.

The senators of the ruling coalition include 27 members of the Pakistan Tehreek-e Insaf (PTI), 12 of Balochistan Awami Party (BAP), three of Muttahida Qaumi Movement-Pakistan (MQM-P), three independents and one each of Pakistan Muslim League-Quaid-i-Azam (PML-Q) and Grand Democratic Alliance (GDA).

The opposition senators include 21 of Pakistan Peoples Party (PPP), 17 of (PML-N), excluding Ishaq Dar who has not taken oath of the office, five of Jamiat Ulema-e-Islam (JUI-F), two each of Awami National Party (ANP), Balochistan National Party-Mengal (BNP-M), Pashtunkhwa Mili Awami Party (PKMAP) and National Party (NP) and one of Jamaat-i-Islami (JI).

The opposition collectively has 52 members in the House excluding Mr Dar, against 47 senators belonging to the ruling coalition.

As the Jamaat-i-Islami has decided to abstain from voting, the difference between the vote bank of the government and the opposition has narrowed down to four.

Meanwhile, ruckus erupted in the House as the opposition stood up from seats and staged protest, claiming that hidden cameras were installed over polling booth. Senator Raza Rabbani said installing spy cameras is violation of the law.

Presiding officer Senator Sayed Muzafar Hussain Shah ordered to make a new polling booth and allowed both the government and the opposition for inspection.

The presiding officer said he will ensure that the secrecy of the ballot is maintained at all cost, the Radio Pakistan reported.

The new chairman will conduct election for the office of deputy chairman senate and administer oath of the returned candidate.

PTI's Sadiq Sanjrani and Pakistan Democratic Movement’s (PDM) Yousaf Raza Gillani are in the race for the slot of chairman Senate while PTI's Mirza Muhammad Afridi and PDM's Maulana Abdul Ghafoor Haideri are contesting for the office of deputy chairman.

The strength of the House has been reduced to 100 after the Senate elections on March 3.

However, it now consists of 99 senators, as Ishaq Dar is in self-exile and has not taken oath as a senator.

Moreover, JI Senator Sirajul Haq has reportedly announced to stay away from the election and this brings the strength of the opposition to 51 senators.