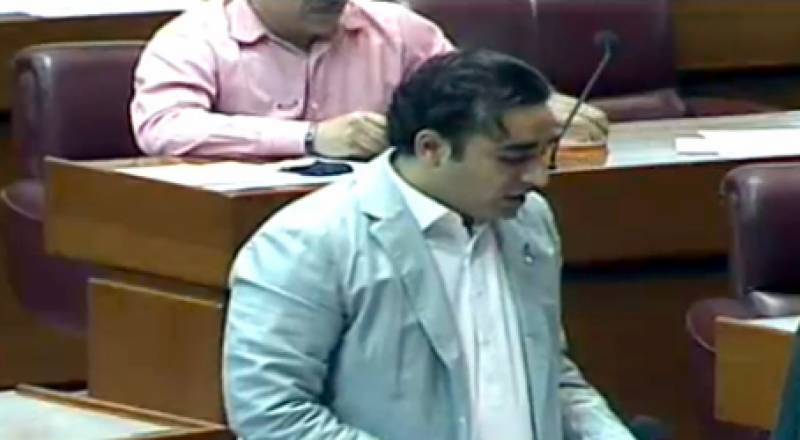 Addressing the National Assembly, the PPP chairman said he would like to share with this house that the night before the no-confidence motion was passed, he was sent a message, a threat that either we accept early elections or face martial law.

FM Bilawal added that this threat was conveyed to him by a government minister via a colleague.

"Despite PTI's repeated attempts to defeat the no-confidence motion against the former premier, their bids were foiled and the no-trust vote was successful," he said.

Bilawal said that Imran and the PTI were still adopting the same strategy where they were trying to create political instability and making irresponsible attacks so that one of two things could happen: early elections without the necessary reforms or that an undemocratic step is taken.

He also demanded an investigation into the events leading up to and post the no-confidence motion that led to former prime minister Imran Khan's ouster.

"This house must form a high-level parliamentary commission or committee to investigate the events leading up to April 3, post-April 3, of the night of April 9 and 10, and the events that have taken place to date." he said.

The PPP chairman said the "attacks on the constitution and the house" should be taken seriously, and an investigation should be held to determine who was at fault.

The minister further said that country’s institutions were made controversial for just one man and due to selected prime minister Pakistan suffered and he did nothing in last four years that could be remembered.

"PTI chief is carrying out attacks against our Constitution, national security and economic stability”. He considers himself a 'sacred cow' because no action has been taken against any of the selected ones till date, " Bilawal said.

"Wherever we see, there is a crisis and the situation in Pakistan is at a crisis point," Bilawal said.

The PPP chief further said that his party was never in the favour of political engineering and noted that his party's demand still stands that first electoral reforms should take place, and general elections should be held after them.

"There is a need to sit together for electoral reforms involving all stakeholders including civil society and political parties to ensure free, fair and transparent elections," Bilawal said.

He stressed the need for repealing all non-democratic bills and ordinances introduced by the past government of PTI to clip the powers of the Election Commission of Pakistan (ECP).