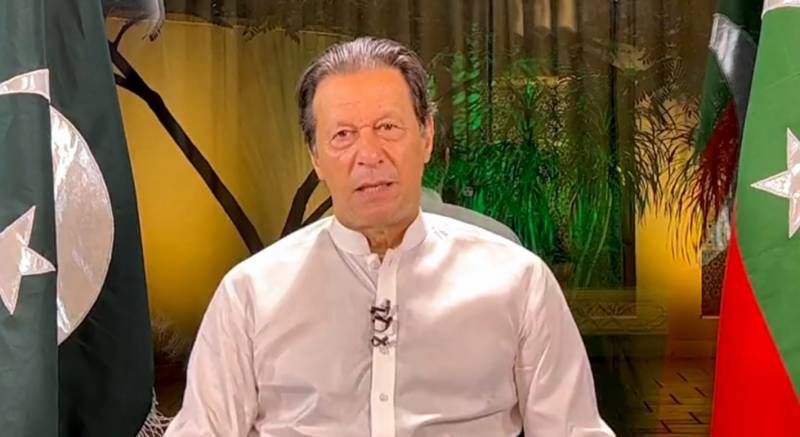 Addressing participants of the party's 'Haqeeqi Azadi March' in Lala Musa via video link from Lahore, the PTI chief said that he never made army chief's appointment controversial.

“I say that the army chief should be appointed on merit. I don’t want an army chief, judge, IG or NAB head of my choice,". the former premier said, adding that he wanted the best people on the basis of merit.

Khan alleged that the country’s incumbent rulers wanted to appoint people of their choice to top posts, claiming the Islamabad IG’s appointment by PM Shehbaz was such an example.

“Because he (the IG) is corrupt, he will now serve him (the PM), he will do every unlawful task given by him.”

Imran also questioned were the “handlers” of the country’s incumbent rulers not worried about Pakistan.

“Were they unable to realise what the robbers being imposed in the country do with it?” he said. “Who is responsible for this?”

While mocking the premier over proceedings of his defamation case against a British daily in the UK’s court, the PTI chief said that Shehbaz Sharif was mistaken that he would receive a verdict of his choice in London. He would now.

The PTI chief also urged people to participate in the long march. "This is not Imran Khan's movement, this is your movement.

Meanwhile, PTI secretary general Asad Umar said that Imran Khan “has no interest” in an army chief of his choice as he has “no wrong action that he wants institutions to do”.

Addressing the PTI supporters in Jhang, Asad said that that whoever deserves the role on merit, should get it.

He objected to the meeting of Prime Minister Shehbaz Sharif with his brother Nawaz in London, comparing it to “as if decisions of a family-limited business” were being taken.

The PTI leader said that Nawaz Sharif is “not only a suspect but a convict”.

He also added that PTI was the party to succeed with the greatest lead from Jhang in 20 constituencies’ elections in July this year.

In a tweet, PTI vice chairman Shah Mahmood Qureshi wrote “Salute to the passion and spirit of the people of Gujarat.

“I firmly believe that not only our Haqeeqi Azadi movement will be successful but very soon Imran Khan will once again be the Prime Minister of Pakistan,” he said.