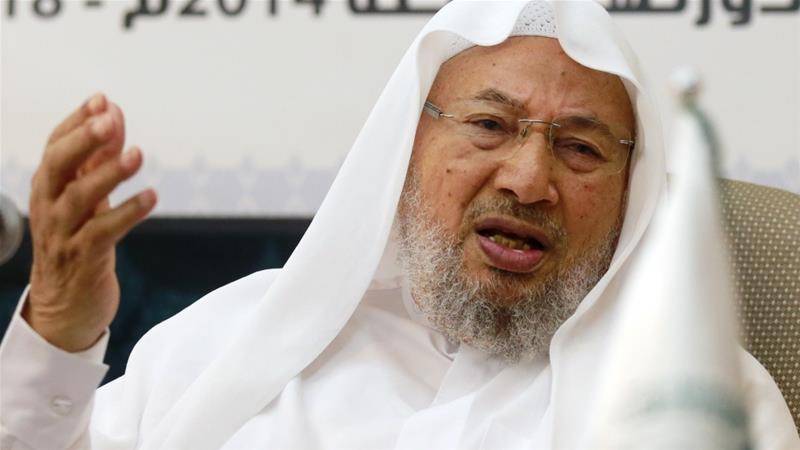 Doha (Web Desk): Interpol has removed from its online wanted list Yusuf al-Qaradawi, one of the most prominent religious leaders in the Middle East, according to the Arab Organisation for Human Rights (AOHR) in the UK.

The international police organisation, Interpol, made the move after it was discovered that the crimes Qaradawi was accused of were nothing more than a cover for the "political crimes" of opposing authorities in Egypt - the country that requested the scholar be put on the Interpol list in 2014, AOHR said in a statement.

Qaradawi, an Egyptian, lives in exile in Qatar.

"The decision by Interpol to remove the name of al-Qaradawi and other names can be considered a defeat to the Egyptian regime," said Mohamed Jamil, president of AOHR.

"It has focused on killing Egyptians, executing wide-scale arrest operations and forced disappearances, extracting confessions using torture, which they subsequently use against the prisoners in court and to request 'red notices' from Interpol, in what can only be termed a cheap abuse of a respected organisation with a noble cause of fighting crime worldwide."

Qaradawi, 91, chairman of the International Union of Islamic Scholars, was listed as wanted for robbery, arson and murder committed after Egypt's 2013 military coup, Al Jazeera reported.

All the alleged crimes were later found to be fabricated as they occurred during his absence from Egypt, and could not have credibly been committed by someone of his age and reputation, AOHR said.

"Many countries, including the United Arab Emirates to be specific, are behind the listing of al-Qaradawi on this wanted list," said Jamil.

"When his name was published, there was a general state of euphoria in the Emirati media followed by the Egyptian media, and others who have always worked to demonise those opposed to the Egyptian regime," he added.

"However, this happiness did not last long, for after a while the truth has become apparent and things will return to their rightful path."

Jamil also said Interpol sometimes exchanges warrants with governments directly without publishing them on its website.

"This is used widely by dictatorial regimes in a blatant exploitation of this system in order to apprehend individuals wanted for opposing these regimes," he said.

Jamil called on Interpol to stop this practice and impose strict controls so governments could no longer use it to pursue political opponents that they had fabricated criminal charges against.