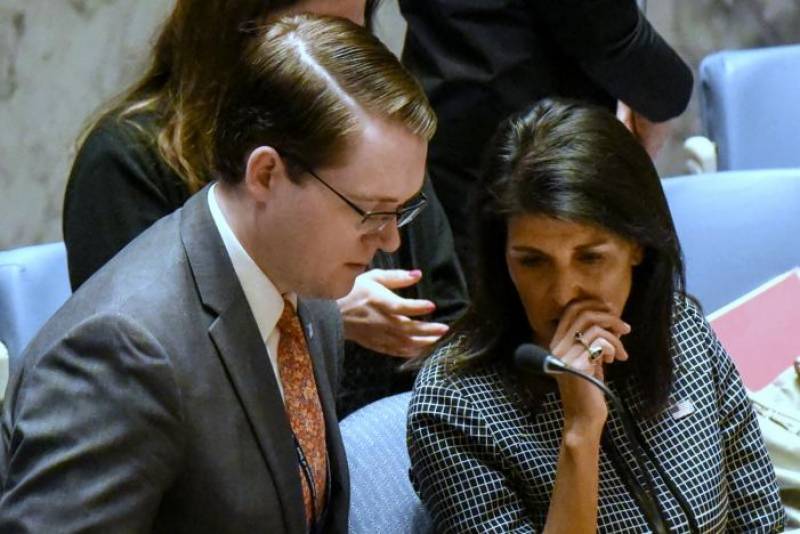 Moscow (Reuters): Russia vetoed a UN resolution criticizing the killings, believed to have been carried out with sarin gas and calling on Moscow ally Syria to cooperate with an international investigation of the events on the ground.

According to details, Russia blocked a Western-led effort at the U.N. Security Council on Wednesday to condemn last week's deadly gas attack in Syria and push Moscow's ally President Bashar al-Assad to cooperate with international inquiries into the incident.

It was the eighth time during Syria's six-year-old civil war that Moscow has used its veto power on the Security Council to shield Assad's government.

In the latest veto, Russia blocked a draft resolution backed by the United States, France and Britain to denounce the attack in the town of Khan Sheikhoun and tell Assad's government to provide access for investigators and information such as flight plans.

Russian President Vladimir Putin said on Wednesday that trust had eroded between the two countries under U.S. President Donald Trump.

U.S. Secretary of State Rex Tillerson echoed that comment after meetings with Russian leaders in Moscow, saying that relations are at a low point with a low level of trust. Tillerson called for Assad to eventually relinquish power.

U.S. Ambassador to the United Nations, Nikki Haley, called on Moscow to stop protecting Assad and said the United States wants to work with Russia toward a political solution for Syria.

"Russia once again has chosen to side with Assad, even as the rest of the world, including the Arab world, overwhelmingly comes together to condemn this murderous regime," Haley told the 15-member Security Council.

"If the regime is innocent, as Russia claims, the information requested in this resolution would have vindicated them."

"I'm amazed that this was the conclusion. No one has yet visited the site of the crime. How do you know that?" he said.

He said the U.S. attack on the Syrian air base "was carried out in violation of international norms."

Syria's government has denied responsibility for the gas attack in a rebel-held area of northern Syria that killed at least 87 people, many of them children.

A fact-finding mission from the Organisation for the Prohibition of Chemical Weapons (OPCW) is investigating the attack.

If it determines that chemical weapons were used, then a joint U.N./OPCW investigation will look at the incident to determine who is to blame. This team has already found Syrian government forces were responsible for three chlorine gas attacks in 2014 and 2015 and that Islamic State militants used mustard gas.

China, which has vetoed six resolutions on Syria since the civil war began, abstained from Wednesday's U.N. vote, along with Ethiopia and Kazakhstan. Ten countries voted in favor of the text, while Bolivia joined Russia in voting no.

U.S. President Donald Trump, speaking at an event in the White House, said he was not surprised by China's abstention.

Britain's U.N. Ambassador Matthew Rycroft told the Security Council that samples taken from the site of the April 4 attack had been analyzed by British scientists and tested positive for the nerve gas sarin. He said Assad's government was responsible.

Diplomats said that Russia has put forward a rival draft resolution that expresses concern at last week's gas attack and condemns the U.S. strike on Syria. It was unclear if Moscow planned to put the text to a vote.