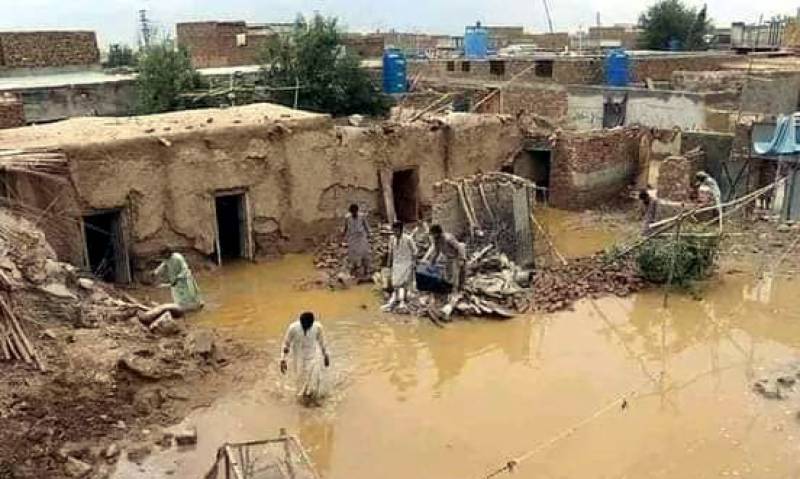 Quetta (Web Desk): The death toll in different rain -related incidents rose to 188 after six more people died and a number of villages inundated in Qila Abdullah and several other areas of Balochistan.

According to the Provincial Disaster Management Authority (PDMA), three dams have been washed away and many link roads destroyed in Qila Abdullah.

The train service between Chaman and Quetta has also been affected due to flood water in the area. Scores of cattles have perished and crops and orchards ruined.

The traffic between Quetta and Karachi was also suspended as the linking highway was damaged in different areas of Lasbela district.

The PDMA rescue teams are present in the area and are providing rescue services to people stranded in the flood-hit areas.

Seeking an immediate report over the affected areas, the prime minister also directed the National Disaster Management Authority (NDMA) and PDMA to expedite the rescue and relief operations in the flood-hit areas.

A directive was also issued for the submission of a complete report regarding breaches in two dams and the subsequent damages caused by flood water.

As per the reports, the premier is soon expected to visit the flood-affected areas of Qila Abdullah.

The prime minister also desired that people trapped in floods should be shifted immediately to the safer areas, besides ensuring arrangements for food and tents for the affectees.

He contacted the public representatives and district administration officials of the flood-ravaged areas, directing them to visit the affected areas and provide all-possible help to the affectees.

In a statement, the chief minister directed for immediate rescue of the people trapped in flood water.