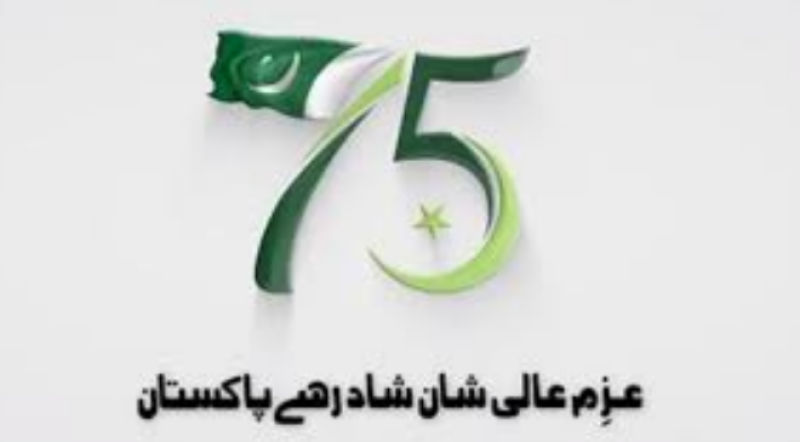 Islamabad (Web Desk): The nation is celebrating diamond jubilee, the 75th Independence Day of the motherland today (Sunday) with a renewed pledge to work with the spirit of Pakistan Movement to make the country a true Islamic welfare state.

Prayers were offered for security and progress of Pakistan and well-being of the people.

National flag has been hoisting at all important public and private buildings.

Flag-hoisting ceremonies were also held across the country. The main event was held in Islamabad, where Prime Minister Shehbaz Sharif hoisted the national flag.

Addressing the ceremony, the premier  vowed to transform Pakistan into an economic powerhouse, saying that those spreading pessimism about the country’s future would be defeated.

Addressing the ceremony, he paid glowing tributes to the leaders of Pakistan Movement. The chief minister also laid a floral wreath at the Mazar-i- Iqbal and offered fateha.

The change of guards ceremony was held at Mazaar-e-Quaid in Karachi this morning. The cadets of Pakistan Naval Academy assumed the guards duties.

In Azad Jammu and Kashmir (AJK) , the 75th Independence Day of Pakistan is being celebrated with national enthusiasm and fervor on Sunday.

The day dawned with 21-gun salutes in the state capital Muzaffarabad.

Special prayers were offered after Fajar Prayer for peace, solidarity and prosperity of Pakistan.

Addressing the ceremony, the AJK president said time is not too far when the oppressed people of Indian Illegally Occupied Jammu and Kashmir would be freed from Indian clutches and people from both sides of Line of Control would celebrate Independence Day together.

In Mirpur, a flag hoisting ceremony was held to mark the Independence Day of Pakistan with a renewal of the pledge to continue the ongoing struggle for the right of self-determination and accession to Pakistan.

The divisional commissioner and other high ranking officers along with important personalities attended the ceremony.

A smartly turned out contingent of AJK Police presented guard of honor on the occasion while the national anthems of Pakistan and AJK were also played.

The print and electronic media highlighted the services of Pakistan Movement heroes on the day and pay tributes to their extraordinary contributions to making Pakistan a reality.