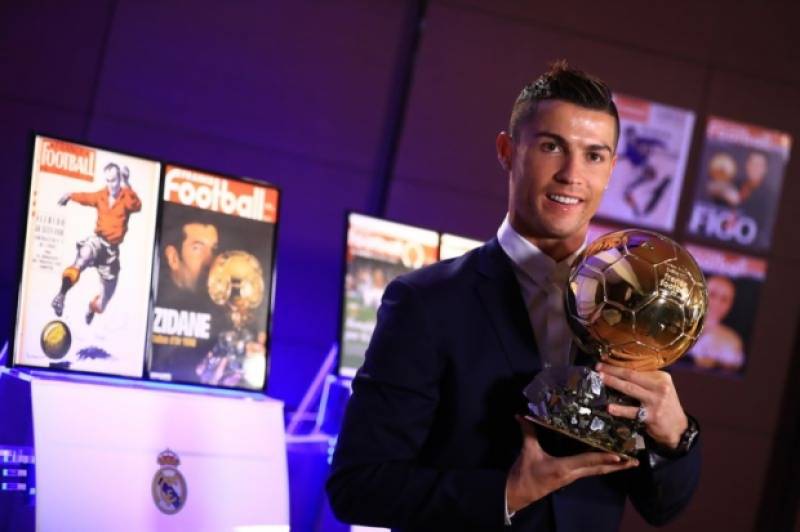 Paris (Online): On Monday, Cristiano Ronaldo won his fourth Ballon d'Or to get one over his opponent Lionel Messi in their long-running contest for the title of best footballer on the planet.

For the Real Madrid star, it was the perfect ending to another fantastic year, who won the Champions League for the second time in three seasons and then led Portugal to their first major title at Euro 2016 -- albeit he went off early wounded and in tears in the surprise win over France.

Since almost a decade now it has been the case, the 31-year-old's main rival was Messi -- but the Barcelona and Argentine maestro had to surrender the crown after a less-than-stellar year for club and country by his lofty standards.

Never one to play down his achievements, Ronaldo was spotted midweek in training having dyed his hair gold in anticipation and several media outlets published a photo earlier on Monday appearing to confirm he was the winner, before France Football made the official announcement.

"For me there is no debate. The Ballon will be for him," Real Madrid coach Zinedine Zidane said after his talisman's hat-trick saw off Atletico Madrid last month to underpin Real's domination in La Liga.

"He showed it last season and he shows it again and again. We expect a lot of him but he stands above everyone."

Despite such effusive praise Ronaldo, rested at the weekend ahead of the Club World Cup in Japan, has had some negative headlines in the past week -- not least pertaining to accusations of tax evasion.

Denying any wrongdoing, he responded by publishing his financial records on Thursday, showing last year he earned a bumper 227 million euros ($240 million).

"You believe I am worried? He who owes nothing, fears nothing," Ronaldo told broadcaster RTP.

But it was only in 2013 that he added his second -- Messi had hogged it before then -- and Ronaldo made it a hat-trick the following year.

The first Ballon d'Or was won by Stanley Matthews, at the time with Blackpool, who beat Alfredo Di Stefano for the inaugural title in 1956.

This year marks the end of six years of joint awards by founders France Football and FIFA, which will revert to bestowing a "Best" accolade of its own on January 9 to both male and female players.

The Ballon d'Or will henceforth be decided by a vote of 173 journalists while national team captains and managers will no longer have a say.