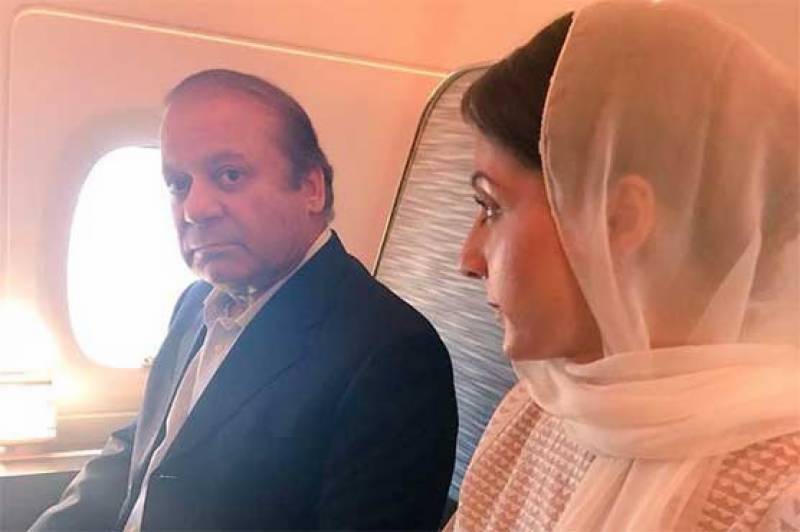 Abu Dhabi (Staff Report/Agencies): Former prime minister Nawaz Sharif and his daughter Maryam Nawaz are in Abu Dhabi on their way to Pakistan from London.

According to sources, their flight has been delayed by an hour and a half.

Their flight, Etihad Airways flight EY243, earlier scheduled to land at 6.15pm local time at Lahore's Allama Iqbal International Airport but now it will land at around 7:45pm.

A 16-member National Accountability Bureau (NAB) team has been tasked to arrest the duo.

The bureau has arranged two helicopters. One chopper would be at Lahore airport, while the other would be in Islamabad, and the father-daughter duo would be arrested upon landing at either of the two airports.

Nawaz Sharif and daughter Maryam Nawaz have been in London prior to Eid-ul-Fitr and are expected to return on Friday. Nawaz and Maryam will be arrested upon arrival in Pakistan following their sentencing in the Avenfield Reference case.

Meanwhile, Pakistan Muslim League-Nawaz (PML-N) president Shehbaz Sharif on Thursday vowed that he and his party workers will go to receive Nawaz Sharif at Lahore airport.

While addressing a pressing conference alongside former Railways minister Saad Rafique and former National Assembly speaker Sardar Ayaz Sadiq, Shehbaz warned police officials against arresting his workers. "Know that time never remains the same and after we win the polls, we will hold you accountable on July 26," he said.

Punjab’s former CM slammed the caretaker government and termed arrests of more than 100 workers from Lahore a “naked pre-poll rigging”.

Ahead of party supremo Nawaz Sharif and his daughter Maryam Nawaz’s return to the country, over 100 PML-N local leaders and workers were detained in a “midnight operation” late Wednesday.

Several UC chairmen, vice chairmen and councilors are among those arrested from various areas of Lahore.