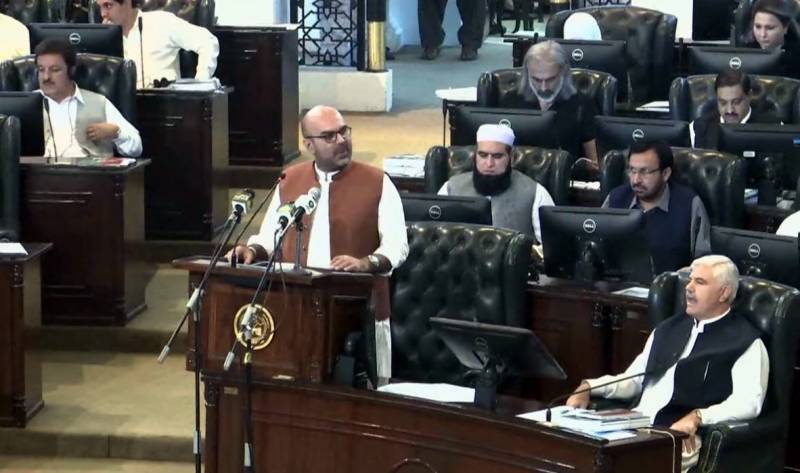 Presenting the budget proposals on the floor of the KP Assembly, Finance Minister Taimur Saleem Jhagra announced that Rs1,109 billion has been set aside for settled districts and Rs223.1 billion for merged tribal districts.

He said the government has allocated Rs 418.2 billion rupees for the Annual Development Program.

Jhagra announced an increase of 16% in salaries and a 15% rise in the pension of government employees, besides announcement of a 15% risk allowance for police personnel from grade 7 to 16 and an increase in the police martyrs package.

The minister said that Rs25 billion has been earmarked for Sehat Card Plus and Rs10 billion have been allocated for provision of free medicine to people including the first ever initiative of free medicine at outpatient departments (OPDs).

Taimur Saleem Jhagra said the government has allocated Rs2,027 billion for elementary and secondary education while more than Rs34 billion for the higher education department.

Regarding revenue and receipts collection, the provincial finance minister said that total receipts were estimated at Rs1,332 billion, including Rs750.9 billion to be collected from federal taxes receipts and Rs68.6billion as one per cent share of the divisible pool on the War on Terror.

He said Rs31 billion would be collected through oil and gas royalty and surcharge and Rs61.9 billion through net hydel power in accordance with MoU 2015-16 and arrears.

The minister said Rs85 billion would be collected through provincial tax and non-tax revenue, Rs4.3 billion under the head of foreign programme assistance (FPA) for settled districts and Rs208.7 billion grants for merged tribal districts besides Rs212.7 billion receipts through other resources.