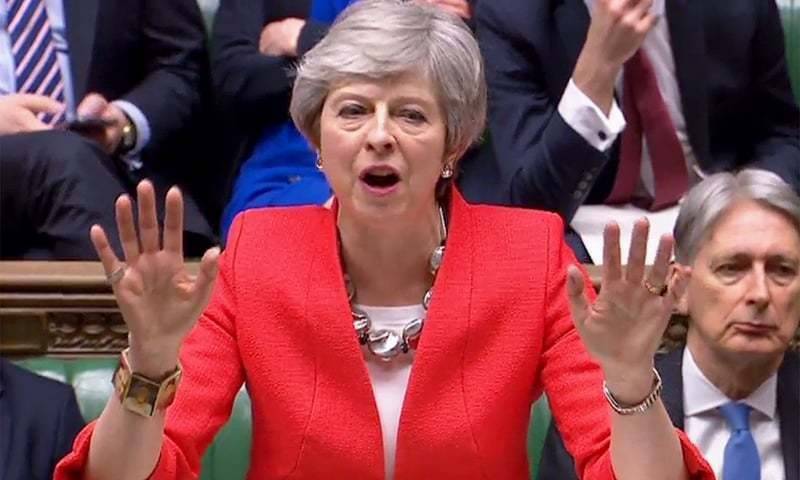 London (Agencies) The British lawmakers overwhelmingly rejected Prime Minister Theresa May's Brexit deal for a second time on Tuesday, pitching Britain into the unknown just 17 days before it is due to split from the European Union (EU).

The House of Commons voted by 391 to 242 to reject the divorce deal, even after May secured further guarantees from Brussels over its most controversial elements.

The move risks unleashing economic chaos, as Britain is scheduled to end ties with its biggest trade partner after 46 years on March 29, no matter what.

But she also warned euroskeptics, many of whom have campaigned to leave the EU for their whole careers, that if her deal failed, so might Brexit.

May has promised to allow MPs to vote on a “no deal” option on Wednesday and if that is rejected, to decide on Thursday whether to ask the EU to delay Brexit.

“If this vote is not passed tonight, if this deal is not passed, then Brexit could be lost,” she said before the vote.

However, euroskeptics believe the deal is so bad it is worth the risk of leaving with no plan.

“We must take what now seems to be the more difficult route but in the end the one that preserves our self-respect,” said former foreign minister Boris Johnson, a favorite to succeed May if she steps down.

“It is to leave on March 29 as required by law and to become once again an independent country able to make our own choices.”

After MPs first rejected the 585-page Brexit deal in January, May promised changes to the hated backstop plan which is intended to keep open the border with Ireland.

Weeks of talks failed to make a breakthrough, but May made a last-minute trip to Strasbourg to meet EU leaders on the eve of the vote.

She announced she had secured the promised “legally binding changes” to the backstop, which would keep Britain in the EU’s customs union if and until a new way was found to avoid frontier checks.

But hours later, however, Attorney General Geoffrey Cox said the additions would not completely allay MPs fears of being trapped in the arrangement forever.

It did not take long for Brexit-supporting MPs in May’s Conservative party, and her allies, Northern Ireland’s Democratic Unionist Party (DUP), to declare their opposition.

“After three months of running down the clock, the prime minister has, despite very extensive delays, achieved not a single change to the withdrawal agreement,” he said.

Some euroskeptics changed their mind, however, urging their colleagues not to risk everything.

Former minister Edward Leigh said: “You may not like the deal, it’s not perfect, but it delivers Brexit and let’s go for it.”

The pound, which has been highly volatile since the 2016 referendum which saw Britons narrowly vote to leave the EU, made gains against the euro after May’s deal on Monday but fell sharply on Tuesday as it became increasingly clear the deal would be defeated.

The backstop is designed to protect the peace process in Northern Ireland, which involved the removal of border checks with EU member Ireland.

Brexit supporters wanted a unilateral way out of it, or a time limit to the arrangement, but the EU said this would make it worthless.

But leaders across Europe also united behind a message that this was the best and final offer Britain could expect.

“There will be no third chance,” European Commission chief Jean-Claude Juncker said after his talks on Monday with May.

If MPs vote against a “no deal” exit on Wednesday, and want to postpone Brexit, the other 27 EU nations would need to agree.

Their leaders will meet in Brussels for a summit on March 21-22.

But any postponement may have to be short-lived. Juncker on Monday said Brexit “should be complete before the European elections” at the end of May.