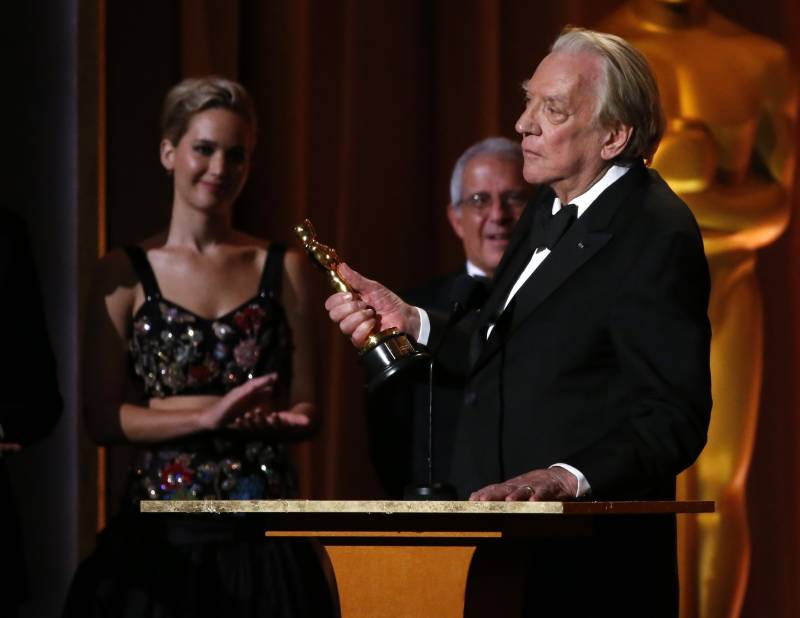 Los Angeles (Reuters): Putting aside the sexual harassment scandal for a night, the stars of Hollywood came out on Saturday to celebrate the work of actor Donald Sutherland and four other filmmakers awarded honorary Oscars.

Sutherland, 82, has appeared in more than 140 films including “The Dirty Dozen”, “MASH” and “Don’t Look Now” and is familiar to a younger generation for the “Hunger Games” franchise, but had never won an Oscar.

“This is very important to me, to my family,” Sutherland said at the annual Governors Awards, where Oscar statuettes are awarded to celebrate a person’s body of work over a career.

“I wish I could say thank you to the characters I’ve played, thank them for informing my life,” he added.

Angelina Jolie introduced Belgian-born director Agnes Varda, 89, awarded an honorary Oscar for a career that began in the New Wave of the 1950s and 60s and whose films include “La Pointe Courte”, “Cleo from 5 to 7” and “Vagabond”. The two women had an impromptu dance on stage. “I got many awards,” Varda said. “Here in the Mecca of cinema, Hollywood, I’ve received the best one.”

African-American director Charles Burnett, whose films include “To Sleep With Anger“ starring Danny Glover, and ”The Glass Shield” featuring Ice Cube, used his acceptance speech to talk of the challenges he faced to tell stories about his community.

“It was incumbent on us to tell our story, our humanity in our way ... using film as a means for social change,” he said.

Mexican filmmaker Alejandro Inarritu, who won Oscars for “Birdman” and “The Revenant” was awarded for his virtual reality film “Carne y Arena” which puts the viewer in the shoes of migrants as they try to cross the U.S. border. He dedicated his honorary Oscar to immigrants “whose  reality  has  been  ignored  and  held  hostage  by  ideologies  and  definitions,  denying  them  the  possibility  of  being  understood  and  loved.”

Hoffman introduced cinematographer Owen Roizman, with whom he worked on “Tootsie” and “Straight Time”, saying: “It’s his combination of insight and versatility and craft that make Owen Roizman special.”

Roizman, who garnered five Oscar nominations for his cinematography but had never won, thanked all the collaborators he had worked with. “This night means so much to me,” he said.