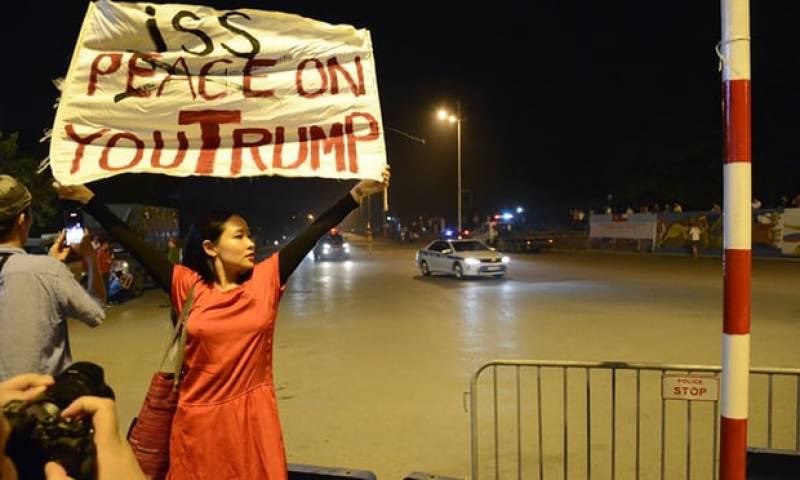 Hanoi (Web Desk): Famous Vietnamese musician and activist ‘Mai Khoi’ is being evicted from her home after protesting against the US president’s visit to Hanoi by holding a sign saying “Piss on you Trump, ” international media reported.

Mai Khoi and her Australian husband Benjamin Swanton were told to leave their apartment in the Vietnamese capital in the early hours of Sunday morning after she staged a demonstration along a route travelled by the US president’s motorcade a few hours earlier.

As the black SUVs roared past, she unveiled a sign saying “Peace on you Trump”, with the letters of the word ‘peace’ crossed out and replaced with the word “piss”.

“I was just protesting the way any American would protest, I haven’t done anything wrong,” she said.

Khoi, a pro-democracy activist in a single-party communist state that bans dissent, is no stranger to trouble. She has been stalked, harassed, detained and has had her concerts raided.

Vietnam routinely jails its critics and was accused of waging a crackdown on dissidents in the months leading up to Trump’s visit to Vietnam, which included an Asia-Pacific Economic Cooperation (Apec) leaders’ meeting in Da Nang and a stopover in Hanoi.

The musician, a one-time winner of Vietnam Television’s album and song of the year awards whose politics eventually made her a pariah in the industry, said she was completely opposed to the controversial US president.

She added that unlike his predecessor Barack Obama, who met with her for an hour during a roundtable discussion in the Vietnamese capital last year, Trump had not once mentioned human rights in Vietnam.

Although the road was swarming with police protecting the motorcade on Saturday, she walked away without anyone seemingly taking notice of her one-minute protest.

But at 10pm that evening, a man and a woman forced their way into her home. Claiming to be employees of the building’s owner, they ordered her eviction on the spot, not even giving her a chance to collect her belongings, and assaulted a visiting friend filming the proceedings, breaking his microphone. The couple said they believed the pair were agents from Vietnam’s secret police service.

The two intruders eventually left, but the eviction order stood and strange men began lingering around the alleyway outside the property. Neither Khoi nor Swanton have dared go outside, afraid that the scuffle from before could escalate into violence.

“I’m still thinking, where do we go?” said Khoi, wondering if their friends would take them in.

“Should we leave the country? How serious is this?” Swanton asked.

“Here, they arrest people just for writing on Facebook,” replied Khoi. “They can arrest if they want.”

Khoi had been evicted once before in July over her politics after police raided one of her concerts, but said this time the action felt more menacing.

“I’m worried more than normal right now. I don’t like the word scared, but I’m feeling uncomfortable,” said Khoi. “I think this is definitely the worst treatment I have received up until now.”

Swanton said harassment was the normal government approach to dissidents in Vietnam.

“When they see that [activists] don’t stop and see them as being too threatening, they lock them up,” he said.

When the sun rose on Sunday morning, Khoi and Swanton ventured outside to a nearby cafe. Strange men were still around the property, but they said they felt safer in daylight. Their landlord had told them they could stay for the day but that their eviction order still stood and they must pack up their belongings. Both are anxious of what may come next.

“They’re not going to arrest Khoi while Trump is here,” said Swanton, 15 minutes before Air Force One was scheduled to leave for the Philippines, the US president’s next stop on his Asia tour. “I feel Mai Khoi is in a very precarious position right now.”