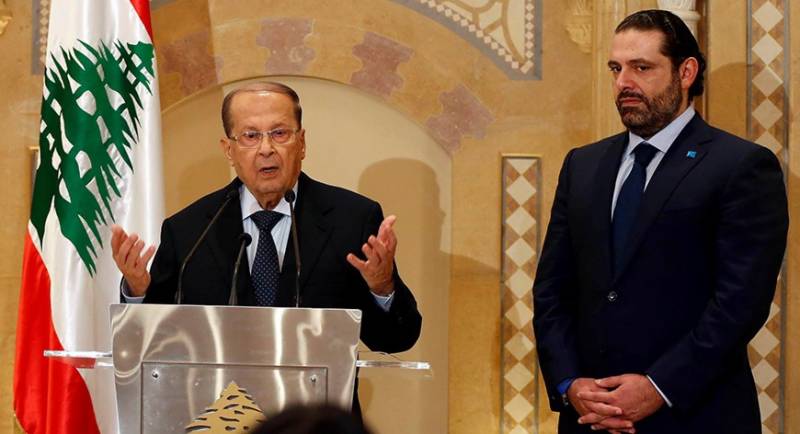 Beirut (Reuters): Lebanese President Michael Aoun gave a positive assessment of Saad al-Hariri’s first comments since stepping down as prime minister, saying on Monday Hariri had hinted at the possibility of rescinding his resignation, visitors to Aoun said.

Saudi-allied Hariri said in the interview he would return to Lebanon within days and held out the possibility he could rescind his resignation if Iran-backed Hezbollah agreed to stay out of regional conflicts such as Yemen.

Hezbollah is part of the coalition government led by Hariri.

The comments were Hariri’s first in public since his shock resignation declared from Riyadh on Nov. 4.

Top Lebanese government officials and senior sources close to Hariri believe Saudi Arabia coerced Hariri into quitting and has put him under effective house arrest since he flew to Saudi Arabia over a week ago.

Aoun said on Sunday that Hariri’s movements were being restricted in Riyadh, the first time the Lebanese authorities had publicly declared their belief that Saudi Arabia is holding him against his will.

Ahead of Hariri’s interview, Aoun had also said that the restrictions on his freedom threw doubt on anything Hariri had said or would say, and that his statements could not be considered a statement of free will.

However on Monday, Aoun noted that Hariri was “leaving all doors open including rescinding his resignation”, according to the visitors, who declined to be identified because they were discussing closed-door conversations with Aoun.

The “diplomatic and national campaign” to secure Hariri’s return had brought positive results, said the visitors.

Aoun has been convening high-level meetings with Lebanese politicians and foreign diplomats since Hariri stepped down.

Hariri’s sudden resignation and its aftermath have thrust Lebanon back to the forefront of the conflict between Sunni Muslim Saudi Arabia and Shi‘ite Muslim Iran. Aoun had refused to accept Hariri’s resignation unless he tenders it in person in Lebanon.