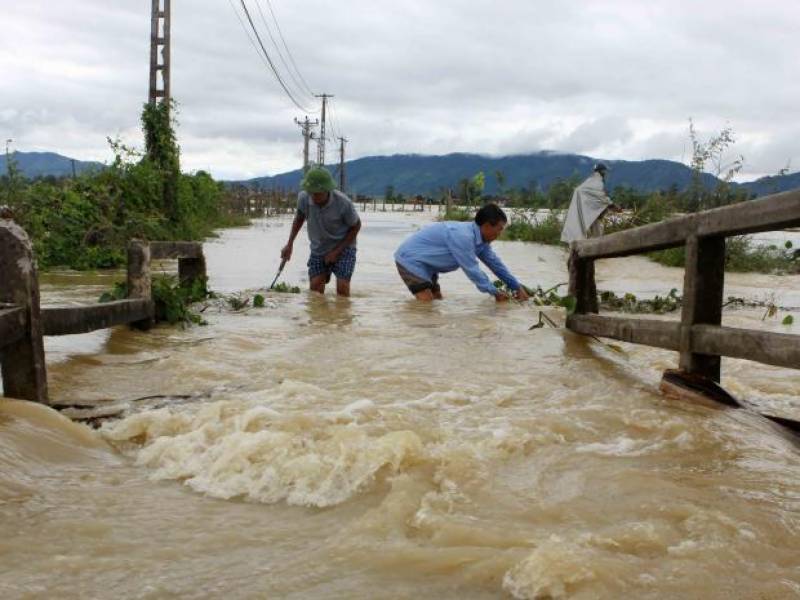 Vietnam (Web Desk): Floods and landslides caused by a tropical depression have killed at least 43 people, left 34 others missing and damaged homes and crops in northern and central Vietnam, officials said.

The storm injured 21 people and destroyed or damaged more than 1,000 houses, submerged 16,740 other homes and damaged infrastructure and crops in six central and northern provinces, the Vietnam Disaster Management Authority said.

In the hardest-hit northern province of Hoa Binh, 17 people died and 15 others were missing. The deaths included four families whose houses were buried in a landslide early Thursday while they were sleeping, killing nine and leaving nine others missing, disaster official Tran Anh Tuan said.

"More than 250 soldiers, police, militiamen and villagers have been mobilized for the search," Tuan said. "But they are facing difficulties because of the huge volume of soil, mud and rocks that buried the houses."

Evacuations were ordered for 200,000 people in Ninh Binh province in the north, a foreign news agency reported.

More rains were forecast for parts of the northern and central regions Thursday as a cold spell moves from southern China to Vietnam, the disaster agency said in a statement. Also, another tropical depression was expected to hit the Philippines on Thursday evening and could strengthen into a tropical storm as it moves across the South China Sea.

Agriculture Minister Nguyen Xuan Cuong was quoted as telling a government emergency meeting Wednesday that it was the first time in a decade that northern and central regions suffered as much rain in a short period of time.

Up to 50 centimeters (20 inches) of rain was reported over the three-day period ending Wednesday in some areas.

Vietnam is prone to floods and storms which kill hundreds of people each year.