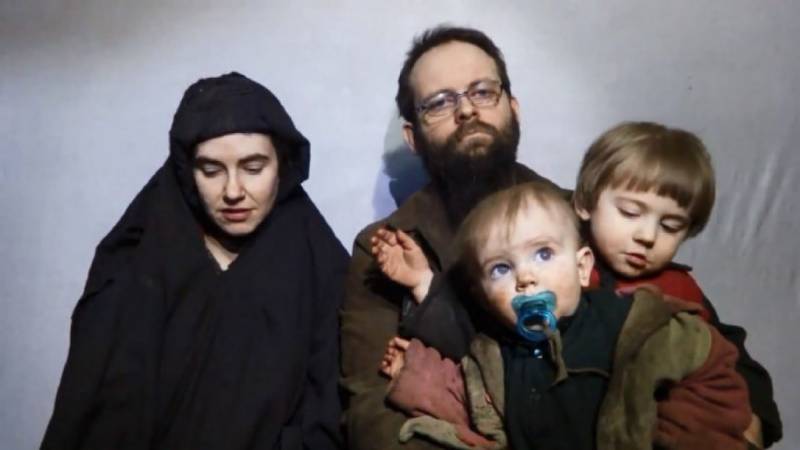 ISLAMABAD (Reuters): Pakistani troops shot out the tires of a vehicle carrying a kidnapped US-Canadian couple and their children in a raid that led to the family’s release after five years of being held hostage, a Pakistani security official said on Friday.

US drones were hovering near the northwestern Pakistani area where American Caitlan Campbell, her Canadian husband Joshua Boyle and their three children, all born in captivity, were freed, another security official said.

Campbell and Boyle were held by the Taliban-linked Haqqani network after being kidnapped while backpacking in Afghanistan, and their rescue marked a rare positive note in often-fraught US-Pakistan relations.

The family flew out of Pakistan on Friday, according to a Pakistani airport official who saw them. It was not clear whether they were bound for Canada or the United States.

A senior Pakistani security source on Friday detailed how the family were freed following a car chase in the northwestern tribal region bordering Afghanistan.

He said Pakistani troops and intelligence agents, acting on a US intelligence tip, zeroed in on a vehicle holding the family as they were being moved into Kurram tribal agency near the town of Kohat, some 60 km (37 miles) inside Pakistan.

Agents from Pakistan’s Inter Services Intelligence (ISI) spy agency and soldiers attempted to intercept the vehicle, but it sped away, according to the security source.

“Our troops fired at the vehicle and burst its tires,” he said, declining to be identified because he is not authorized to speak openly to the media.

The kidnappers managed to escape, the security official added, saying the troops wouldn’t fire at the fleeing captors for fear of harming the hostages. The army recovered the hostages safely from the car.

Army spokesman Major General Asif Ghafoor told NBC News that the vehicle’s driver and another militant had escaped to a nearby refugee camp.

The family’s rescue has been hailed by US President Donald Trump as a “positive moment” for US-Pakistan relations, which have frayed in recent years amid Washington’s assertions that Islamabad has not been doing enough to tackle Haqqani militants who are believed to be on Pakistani soil.

Trump, in a statement, said the release of the hostages showed Pakistan was acquiescing to “America’s wishes for it to do more to provide security in the region”.

A second Pakistani security official, speaking on condition of anonymity, said US drones on Wednesday had been seen circling Kohat, suggesting US co-operation included sophisticated surveillance inside Pakistan.

Kohat is deep inside Pakistani territory, next to the eastern edge of Kurram agency in Khyber-Pakhtunkhwa province - outside the Afghan frontier zone where US drones have in the past been tolerated by Pakistan.

The US embassy and the Pakistani military did not comment on the drone report.

However, a Taliban commander in Pakistan with knowledge of the hostage family said US drones flying in the area prompted their captors to move them.

“We took care of this family like our own family members and special guests, but after frequent flying of US drones on Kurram tribal region and its adjoining areas, it was decided to move them to a safer place,” said the Taliban official on condition of anonymity.

“They were being shifted to a safer place when captured by the Pakistani forces.”

Pakistani officials bristle at US claims Islamabad is not doing enough to tackle Islamist militants, particularly the Haqqanis. After the release of the family, they emphasized the importance of co-operation and intelligence sharing by Washington, which has threatened to cut military aid and other punitive measures against Pakistan.

Pakistan’s military indicated the family were rescued shortly after entering Pakistan from Afghanistan, and a government official repeated that assertion on Friday.

“We have been taking on the terrorists... So we have taken action based on the intelligence that was provided by the US side,” said Foreign Ministry spokesman Nafees Zakaria.

However, two Taliban sources with knowledge of the family’s captivity said they had been kept in Pakistan in recent years.

A US government source in Washington also said there was no indication the family had been in Afghanistan.

The Haqqani network operates on both sides of the porous Afghan-Pakistani border but senior militants have acknowledged they moved a major base of operations to Kurram agency in the tribal areas.

The United States and Afghanistan say that safe havens inside Pakistan allow the Taliban, including the Haqqani network, to plan and launch attacks against the Western-backed Afghan government and US and other foreign troops that support them.

The Taliban have been fighting for 16 years to re-establish their ultra-Islamist regime that was toppled in a US-backed military operation over sheltering the al Qaeda terrorist network that planned the Sept. 11, 2001, attacks on US cities.