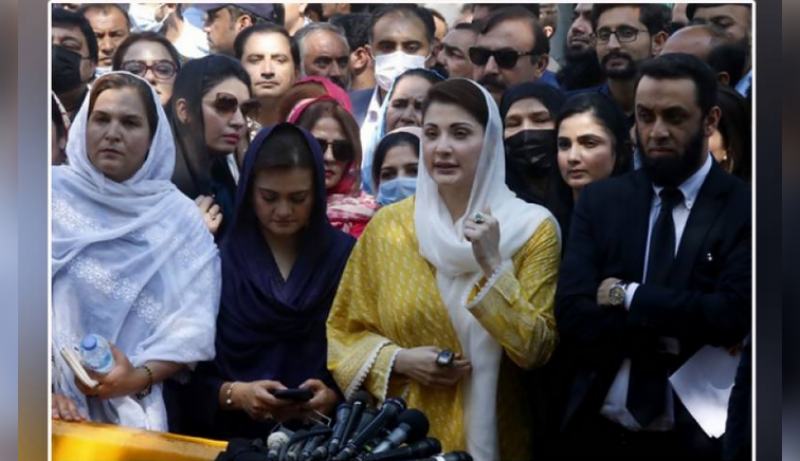 Talking to newsmen outside the Islamabad High Court (IHC), the PML-N leader stated that the NAB has requested for her and her husband's bail to be cancelled, stating that she felt like "children were scared" when she read the petition.

"Go ahead, revoke my bail, arrest me, so that the people can see how fearful you are," she challenged the government.

The PML-N leader said that after reading NAB petition against her, she wants to know the ‘super intelligent’ officer who filed the petition. The officer deserves a 21-gun salute, she added.

Criticising PM Imran, Maryam said that he is not an elected premier and is ruling the country through magic.

Maryam raised a question on PM Imran Khan's identity and said that it is confined to "conspiracies," adding that he has "nothing to do with the principles of law and democracy".

She said that the premier will have to "answer for his conspiracies".

Why don’t you use magic to reduce prices of petrol and flour, she asked Imran Khan.

Earlier, IHC conducted a hearing on appeals filed Maryam Nawaz against her sentence in Avenfield reference.

A two-judge bench, comprising Justice Aamer Farooq and Justice Mohsin Akhtar Kayani, had taken up an appeal filed by Maryam against her conviction in the Avenfield properties case, in which she claimed that she had been persecuted at the behest of "certain people".

During the hearing, Maryam Nawaz’s counsel Irfan Qadir said NAB wants to send his client to jail after cancellation of her bail.

Justice Amir Farooq remarked that NAB is following police system as it arrests anyone even without proper evidence.

Maryam’s lawyer said that the NAB could not produce documents linking the former prime minister, Nawaz Sharif, and his daughter to the flats in London.

He said the PML-N vice president "inherited" the sentence.

"If there was no case to be made against Nawaz then how can Maryam's case go to trial," the counsel added.

According to Irfan, the due process of the law was violated in the case. He said it was out of the question for the NAB court to take up the case as rules were not followed.

After hearing Maryam’s lawyer, the court directed the NAB to present its arguments at the next hearing. The case was adjourned until November 17.