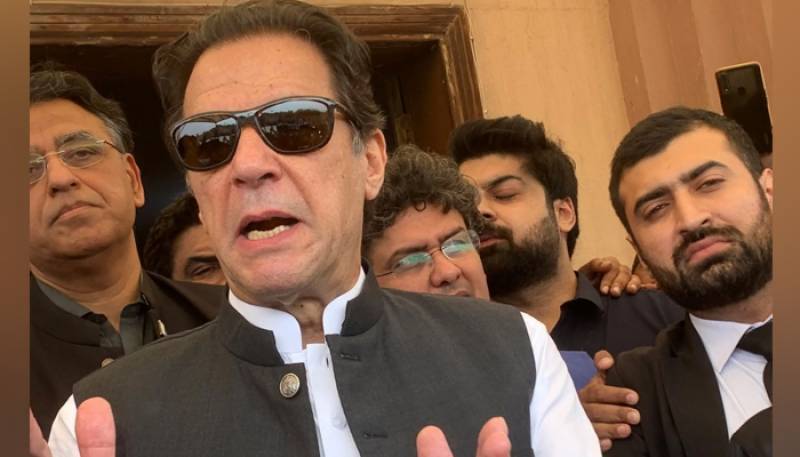 Sessions Judge Kamran Basharat Mufti granted Imran permanent bail in two cases against a bond of Rs 50,000, including in the case registered at the Kohsar police station against his threatening remarks.

The former premier appeared before the court along with his lawyer Babar Awan.

During the hearing, Awan informed the court that his client has been named in two cases and asked the court to approve the bail.

At this, the court asked prosecutor Wajid Munir to share his stance.

Munir told the court that Kohsar Police Station has attached section 505 in the first information report (FIR) which is a non-bailable offence.

But PTI Lawyer told the court that a case was also registered at the Margalla Police Station, adding that ant-terrorism clauses were added in the FIR but it was removed on the orders of the high court.

The judge then remarked that the public gathering was happening at the F-9 Park then how come section 144 applied to the case?

He also remarked that the FIR does not include section 506-2, adding that there are bailable provisions in the case.

Following this, the court approved the bail of the PTI chairman.

On October 6, a sessions court in Islamabad had granted interim bail to Imran Khan in the case.

As per the details, the PTI chief reached an Islamabad sessions court a day before his interim bail, granted by the Islamabad High Court (IHC) last week, was to expire.

The case against the former prime minister was registered on August 20 with the Margalla Police Station in the federal capital over his remarks at a rally in F9 Park where he warned Additional District and Sessions Judge Zeba Chaudhry and high ranking police officials of dire consequences, as well as the judiciary for what he had called its “biased” attitude towards his party.

The First Information Report (FIR) was lodged hours before another Islamabad police station received a written complaint from a resident of G-11/2 for lodging a case against Imran over making hate-speeches, and inciting rebellion against the army, police and judiciary.

The FIR was registered less than an hour after Imran Khan addressed party workers and supporters at a rally in Islamabad’s F-9 park to express solidarity with PTI leader Shahbaz Gill, who was arrested on sedition charges on August 9.