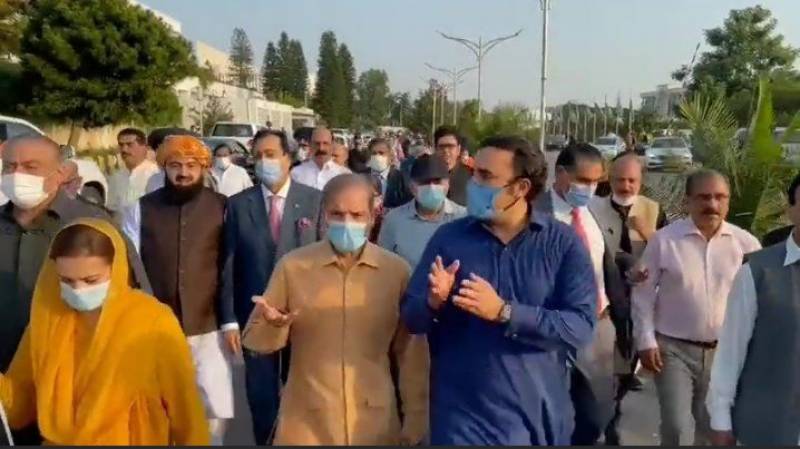 “We have just staged a full scale protest in the Parliament against media bill”, Shehbaz Sharif said, assuring the journalists to stand with them in struggle for the freedom of media in the country.

Speaking on the occasion, PPP Bilawal Bhutto Zardari said that if the black law is passed, we will support media in the court and in the streets against it.

He added that Shehbaz Sharif has brought us all together, we have come to express solidarity and we are all on the same page regarding freedom of media.

Addressing the journalists sit in, Jamiat Ulema-e-Islam-Fazl (JUI-F) chief and head of Pakistan Democratic Movement (PDM) Maulana Fazlur Rehman, said that where there is a monarchy, there is no independent journalism. He said that we stand together in the fight for the rights of journalists.

However, led by Opposition Leader Shehbaz Sharif and PPP Chairman Bilawal Bhutto Zardari, the opposition staged a walkout soon after the address began.

Opposition parties had threatened to boycott the session and stage protests in and outside the parliament house.