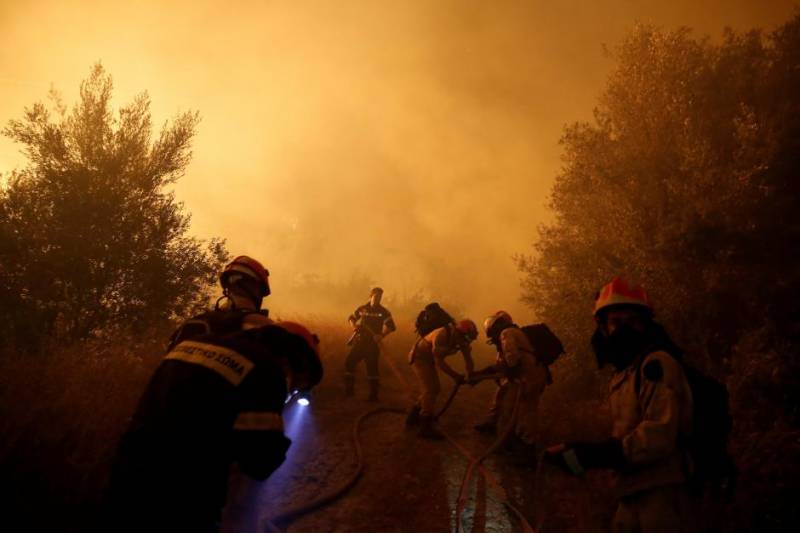 Athens, Greece (Reuters): Firefighters on Monday battled to contain a wildfire northeast of Athens as high winds caused the blaze to spread overnight after it damaged dozens of homes at a coastal village northeast of the Greek capital.

More than 160 firefighters with 68 fire engines, two water-dropping helicopters and two fire-fighting planes tackled the blaze, which broke out in Kalamos, a coastal area 45 km (30 miles) northeast of Athens and had spread to the nearby town of Varnavas.

"There are many fronts but the biggest one is at Varnavas. There is a lot of water consumption as people hose down their homes and as a result not enough water," the vice-prefect of eastern Attica, Nikos Filippou, told Skai TV.

Thick smoke billowed over as the blaze burned pine forest.

Fire brigade officials told Reuters no injuries had been reported but at least a dozen houses were heavily damaged.

Authorities had ordered a precautionary evacuation of two youth camps in the area.

Hundreds of residents fled the area of Kalamos, heading to the beach to spend the night.

"It was a terrible mess, that's what it was. You could see homes on fire, people running, people desperate, it was chaos and the fire was very big," a resident of Kalamos village told Reuters TV.

The cause of the fire was unknown, but summer wildfires are common in Greece. More than 70 died in 2007 during the worst fires in decades.