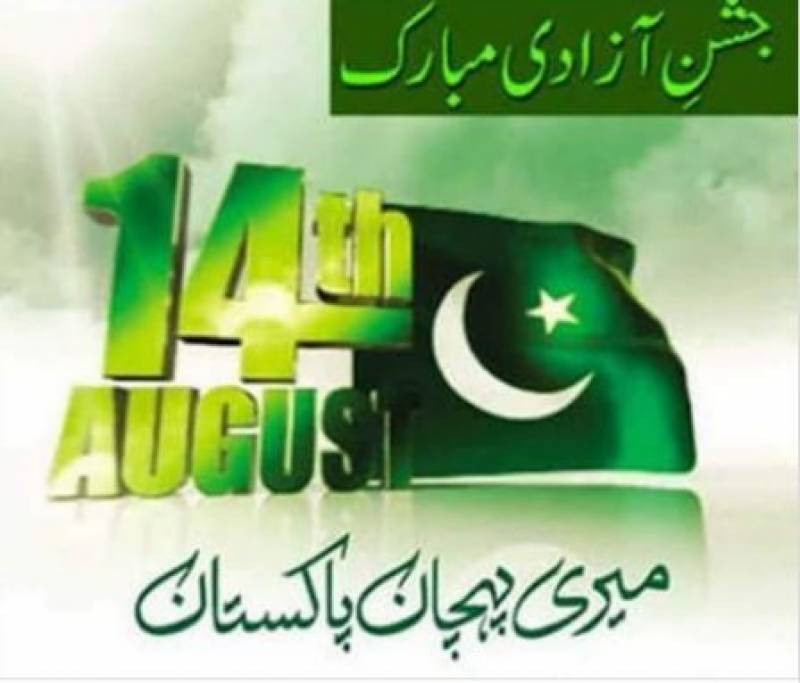 Islamabad/ Lahore (Staff Report /Agencies): Pakistanis are celebrating Independence Day with renewed resolve to work with the spirit of Pakistan Movement to make the country a true Islamic welfare state.

Special prayers were offered in mosques for the solidarity and prosperity of the country.

Change of guard ceremony was held at Mazar-e-Quaid in Karachi on Tuesday morning. Cadets of Pakistan Navy took charge of their duties at the Mazar.

National flag is hoisting at all important public and private buildings.

Addressing the nation on this occasion, President Mamnoon Hussain said that a strong, developed and a democratic Pakistan is destiny of the nation.

He said the general elections coincided with the independence day. This also envisages a message that the power of taking decisions in the country rests with the people who also achieved this country through a democratic struggle, he asserted.

The President said the people of the country made a stamp on this principle by fully participating in the general elections on 25th July. he said the people have proved that only those laws will be applicable in the country which will be enacted by their representatives.

He prayed the God Almighty to help the new government in addressing the problems of the people.

Mamnoon Hussain underlined the need for promotion of harmony and cohesion in the society to put the country on the path of progress as envisioned by the founding fathers.

The President said Pakistan is the hope and a blessing of God Almighty for the creation of which our forefathers gave unprecedented sacrifices. He urged the political leaders, intellectuals and the media to play their role for promotion of unity and steer the country out of current challenges faced in the areas of economy, education and others.

Turning to outstanding Kashmir dispute, the President said Pakistan will continue to extend moral, political and diplomatic support to their Kashmiri brother in their just struggle for right to determination. He also urged the international community to raise their voice so that the Kashmir people could get their inalienable right.

Meanwhile, the flag hoisting ceremonies were also held in the provincial capitals as well as district headquarters.

In Lahore, the main ceremony of the Day was held at Hazoori Bagh in which the Caretaker Chief Minister Dr. Hassan Askari hoisted the national flag.

In his address, the Caretaker Chief Minister lauded the services of national heroes of Pakistan Movement and paid rich tributes to the people who sacrifices their lives and properties for creation of a separate homeland.

Furthermore, a simple but graceful ceremony of Change of Guards was also held at Mazar-e-Iqbal in Lahore in which Pakistan Army took charge from Punjab Rangers.

Acting Sindh Governor Agha Siraj Durrani and Caretaker Chief Minister Sindh Fazal ur Rehman along with Provincial Cabinet members visited Mausoleum of Quaid-i-Azam in Karachi, laid floral wreath and offered Fateha. They paid rich tribute to the father of the nation on the eve of the Day.

In Khyber Pakhtunkhwa, the day dawned with 21 gun-salute while special prayers were offered at mosques for country’s safety prosperity and development. The main function in connection with the Independence Day was held at Civil Secretariat Peshawar.

A car rally was arranged in connection with the Independence Day started from Peshawar today.

Governor and Caretaker Chief Minister Khyber Pakhtunkhwa in their messages on the occasion of Independence Day have asked the people to work for materializing dream of the founder of the nation for making the country an abode of peace, prosperity and stability for our future generations.

In Quetta, the day was dawned with 21 gun-salute while special prayers were offered at mosques for country’s safety prosperity and development.

The major ceremony held in Balochistan Assembly during which the Caretaker Chief Minister Alauddin Marri hoisted the National Flag. Besides, national Anthem was also played.

Moreover, Pakistan Air Force has unveiled a new song to revive the zest within the public of serving their country.

Released on the eve of Independence Day, the song is titled ‘Ay Watan Terey Liyay’ and is brought to life by the vocals of acclaimed singer Khadeeja Haider.