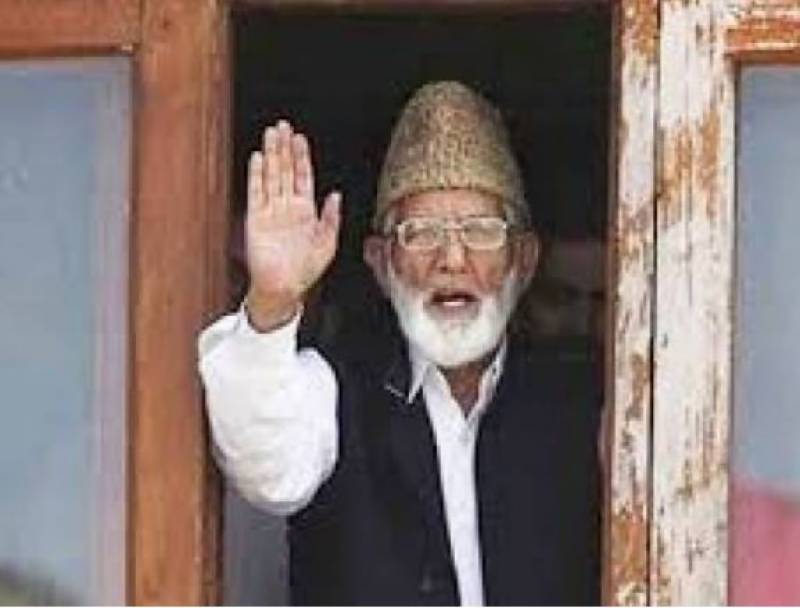 Islamabad (Web Desk): Nishan-e-Pakistan, the country's highest civil award, was conferred upon veteran Kashmiri leader Syed Ali Shah Geelani on Pakistan’s Independence Day in recognition of his struggle spanning over decades for the right to self-determination of Kashmiri people.

The prestigious award was received by Hurriyat leaders on Geelani’s behalf from President Dr Arif Alvi in a ceremony held at the Aiwan-e-Sadr in Islamabad on Friday.

In the award giving ceremony, glowing tributes were paid to Syed Ali Geelani for his unwavering commitment, dedication and leadership and his role in exposing Indian atrocities, suppressive measures and human rights violations in occupied Kashmir.

Also, concern was expressed over continued unjustified house arrest of the veteran Hurriyat leader in frail health at the age of 90 years.

Syed Ali Shah Geelani was born in the Bandipora area of northern Kashmir on September 29, 1929.

Being a staunch advocate of Kashmiris' right to self-determination, he has been the leading voice against Indian oppression and injustice in the occupied valley.

The Hurriyat Conference, an umbrella organisation formed in 1993 by various pro-freedom groups in Kashmir, provides a political platform for voices that wish to rid the area of Indian occupation.

However, there was a split in the group in 2003 with Geelani leading a separate faction that was in favour of accession to Pakistan. The split formed when Geelani walked out after another group decided to hold talks with New Delhi.

Ali Geelani was elected chairman for life of his Hurriyat group, which comprises 24 constituent parties.

Hurriyat’s other faction is led by Mirwaiz Umar Farooq, who has been under house arrest since August 2019.